In recent years, the influence of digital technology has become more apparent in our day-to-day lives. Subsequently, the search to find more intuitive ways to benefit from future-focused technologies has also intensified. Augmented reality is one such great innovation that has revolutionized several industries and business sectors. It is enabling people to replace the traditional form of interaction between humans and machines with a more immersive and realistic way of interaction.

AR has been in the talks for a long time now. However, in this article, we will particularly focus on the implementation of Augmented Reality in the gaming industry. It offers an interactive and sophisticated way that enables the software and mobile app developers to cover and present digital data that is nearly identical to real-world objects. Let’s delve deep into AR game development solutions and its key highlights and features. 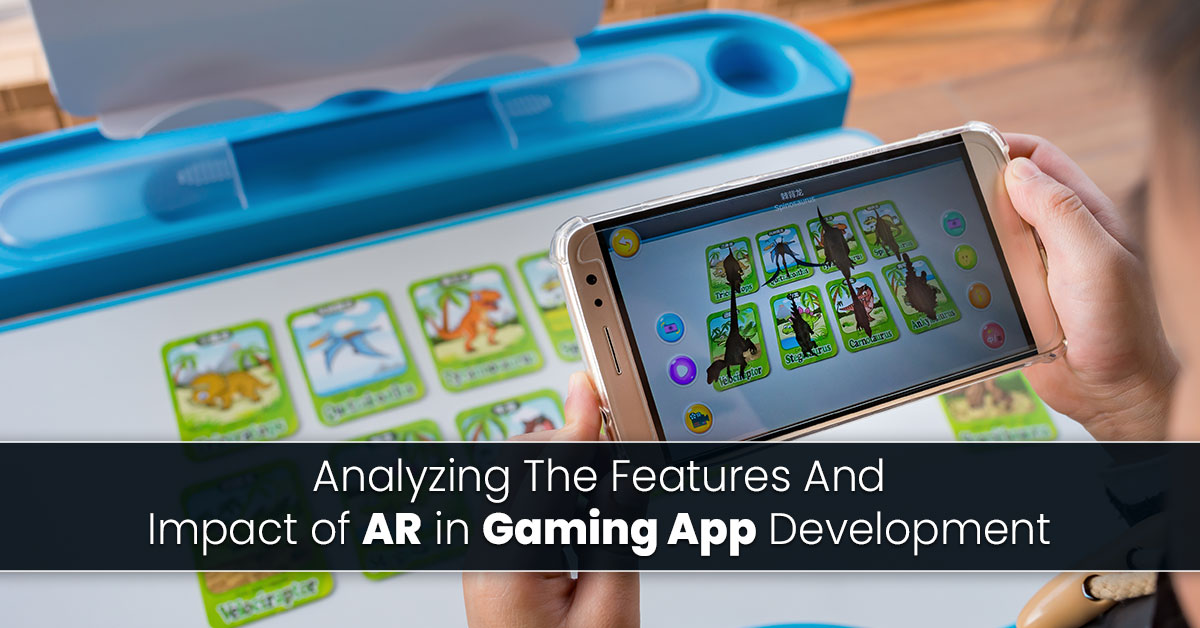 Evaluating The Impact of AR In The Gaming Industry

According to a report published by Statista, the number of users leveraging Augmented Reality is predicted to reach over the mark of 800 million by the end of this year. Moreover, it is also expected to become a community of approximately 1.73 billion by 2024.

The sole objective of implementing AR in game app development solutions is to offer an engaging and interactive experience to the players while enhancing the visual appearance of the game.

Besides gaming application development, the presence of AR technology can also be noticed in many other sectors such as medical training, retail, design & modeling, business logistics, classroom education, and more.

The following reasons will assist you in contemplating the impact of augmented reality in the gaming industry.

AR makes it possible for gaming app developers to build a digital environment just like the real world, wherein players can interact and experience the gaming elements. This fundamental attribute of AR is attracting the gaming community to a huge extent and is appealing to them to deliver a memorable gaming experience. The AR technology takes the computer-planned objects and converts them into objects that appear just like the real world items so as to deliver a realistic gaming experience to the users.

In the mobile gaming landscape, augmented reality furnished endless possibilities. It offers several benefits to the AR app development & game app development companies as well as the users that opt for different approaches, seeking to replace traditional gaming methodologies available in the marketspace. It is actively considered as a next-gen technology that has entirely transfigured the gaming industry and given birth to the possibility and scope of tech integrations and creativity.

We have witnessed the mobile app and gaming industry flooding with the latest and improved gaming consoles that are indubitably succeeding the version of their previous iterations.

Therefore, it often becomes a tedious task to select the most suitable one. A similar thing is happening with the inception of AR in the gaming world. It is providing mobile app developers with new opportunities to incorporate and implement the latest technologies into their games.

As a result, more and more gaming consoles are being built upon the features and functionalities of AR-based games. This innovation is immensely enhancing user engagement and propelling the routes of gamer’s imaginations.

The core principle of Augmented Reality is to match the gaming experience with that of real-world scenarios. It enables gaming and AR app developers to customize the gaming characters and other gaming elements to enhance the character’s visual appearance and make it look just like the real one.

In the real world, everyone has acquaintances, relatives, and friends. In order to help you compete with real-world conditions, AR games can enable you to invite other people that you like and play together. Depending on your choice, you can visualize their character appearance and also match up with the ones in the real world.

When combined with the power of the internet, the applications of augmented reality and its capabilities can reach a whole level. The user’s mobile or other devices can connect to the cloud server by leveraging the internet connection, gather and fetch the real-time information and display or present it on the viewer’s screen.

Augmented reality-based gaming apps can be seamlessly integrated and designed to cater to different age groups. From adults to kids, everyone who uses a smartphone can access and benefit from AR-based games. This denotes the scalability and adaptability of AR game app development services.

A majority of the businesses and game app developers have swiftly accepted and recognized the importance of gaming and AR app development services. Augmented reality is mainly used for developing immersive gaming mobile applications and utilized as a way to make machine and human interaction more interactive and meaningful.