Know Which OTT TV App Will Work Best For Your Business

The exponential growth in the demand for audio and video streaming services across the globe has made Over-The-Top (OTT) apps an unmissable part of the media & entertainment industry. Moreover, it is not just the entertainment sector that is making the most of OTT platforms, other sectors such as gaming, education, health & fitness, real estate, and more are realizing the benefits of streaming audio & video content over the internet, instead of the traditional broadcasting mediums like the satellite.

According to a Statista report, the number of OTT users is anticipated to rise to more than 3930.3 million by 2026, and the user penetration is expected to hit a massive 49.9%.

In addition to this, there are several reasons why OTT apps are gaining popularity and market dominance over other content delivery platforms, some of which are mentioned below:

Nevertheless, the ability of OTT applications to make the digital media content omnichannel is what makes them one of the most sought-after choices for businesses to reach their preferred target audience base. There are also a plethora of streaming solutions and devices which have distinct Operating Systems. For instance, Smart TVs can be based on Android, FireOS, tvOS, and Roku, just to name a few.

In this blog, we will discuss which OTT TV App will work best for your business and how should you relatively opt for OTT app development services. So, let’s get started. 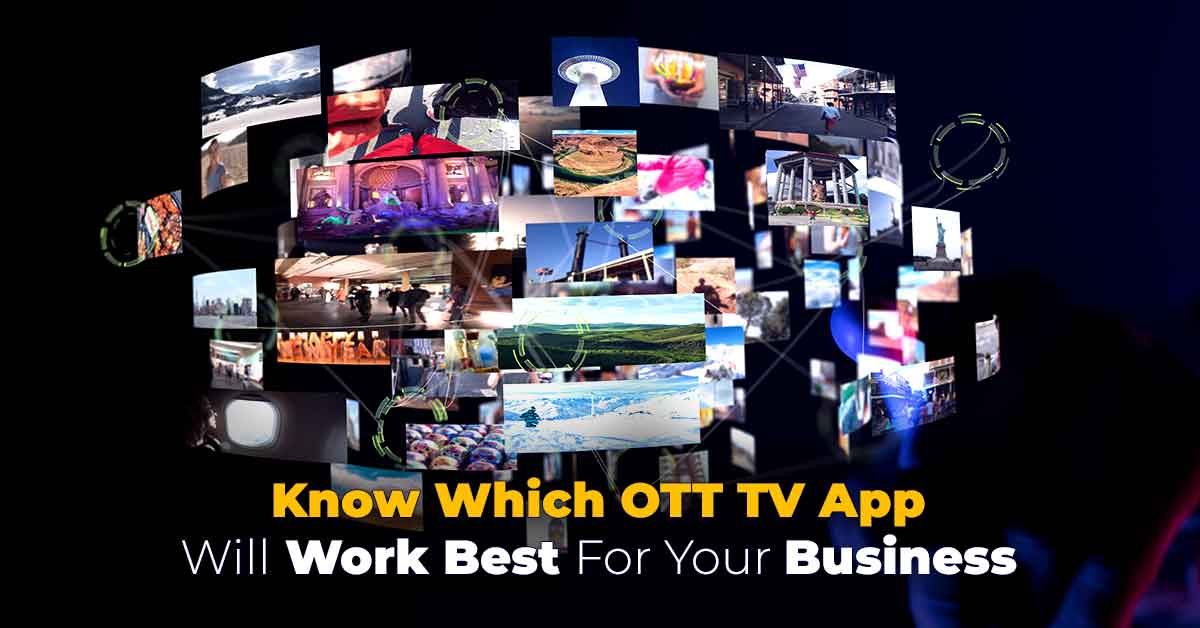 The term OTT stands for Over-The-Top and an OTT TV platform is one that delivers digital media content to your smart TV using the internet.

In accordance with conventional practices for viewing favorite videos or shows, users were required to subscribe to a traditional cable & broadcasting service provider. However, thanks to the robust global network connection, there has been a significant rise in the popularity and adoption of OTT platforms over the past few years such as Amazon Prime and Netflix. These apps have monumentally transformed the way people consume content.

If we specifically talk about OTT TV apps, it is imperative for businesses to know the right platforms for OTT app development. Depending on the flexibility, popularity, geography, and features, suitable OTT TV platforms can be factored in. Here, we have mentioned some of the most widely used OTT platforms that can work best for various businesses and industries.

Roku is indubitably one of the leading TV streaming platforms in the world. Despite facing cutthroat competition from giants such as Apple, Google, Amazon, and other video streaming providers, it continues to have a solid presence in the market.

One of the prime reasons why Roku has gained immense popularity is because of its extensive range of cost-effective devices which inculcates Block Boxes (which connects directly to WiFi) and HDMI sticks (which plug into the TV). In fact, a majority of the smart TVs come pre-installed with Roku software. It ultimately means that no Roku device is essentially required to have OTT TV apps constructed for the platform. With more than 5000 channels on Roku, it is one of the most widely-considered platforms for OTT app development.

A media player by Amazon, FireTV is used for streaming media, games, music, movies, etc on TV. It plugs into the HDMI port of the TV and subsequently turns it into a smart TV. The device preeminently comes in two forms: the Fire TV stick (which is an HDMI plug-in stick) and a Fire TV cube (which is basically a set-top box with an embedded Amazon Echo Smart speaker).

According to market share, Fire TV is one of the biggest rivals of Roku. Together, Roku and Fire TV combined cover nearly 70% of the digital streaming market space globally.

Android TV is basically the version of Google’s Android operating system that is specifically configured for TVs. It is an all-inclusive set-top box and smart TV solution used by tens of millions of users worldwide, according to Google.

In contrast to the Chromecast streaming device by Google, it allows users to cast media from smartphones to TVs. Therefore, Android TV is a complete operating system that enables viewers to download applications as well as other Google-powered services on TV.

The commendable popularity of this OS for smart TVs can be evaluated by the fact that more than 40% of the smart TV OS globally is architected on Android TV OS. So, if you are planning to build a smart TV channel for a global audience, then Android TV app development is incessantly for you.

Similar to Fire TV and Roku, Apple TV is a streaming device that efficiently connects with a high-definition or enhanced-definition TV via an HDMI cable. If we take a glance at the market share of streaming devices at the worldwide level, Apple TV is only slightly behind Roku, Amazon Fire TV, and Android TV, however, it still has a strong foothold in the video streaming segment.

Apple TV devices allow users to stream movies, and music, play games, watch podcasts, and more. In addition to this, one of the most used digital services in relation to Apple TV is gaming. According to a survey conducted by Statista, more than 51% of respondents confirmed that they use Apple TV for playing games.

A trusted OTT CMS can lift the burden off your shoulders by simplifying content management, distribution, and online video streaming on a real-time basis.

What is the difference between SFU and MCU

WebRTC media servers .What does that mean? SFU or an MCU

Top 4 CRM Features To Implement In Your OTT Business

CRM software for OTT helps in managing and automating the customer lifecycle for sales & marketing, performance management, and subscription management.