Exploring The Implications of Microservices and Micro Apps

An Introduction To Microservices and Micro-Apps

As technology evolved and blossomed into new innovations, the limited boundaries of computing were pushed beyond what we initially perceived as impossible. Eventually, computers that took up the entire room steadily became things that we could place on desks and work with, without any reduction in computing efficiency.

Over time, the emphasis on size, speed, and efficiency has also become more prominent in computing hardware transition. Subsequently, it has been perfectly mirrored in modern software development methodologies as well. This trend for lighter, faster, and more engaging software is the sole reason why microservices and micro apps emerged and have become the most sought-after topics in the tech landscape today.

In this blog, we will discuss what microservices and micro apps mean, what are the prime differences between them, and what are their critical implications. So, let’s delve into the basics first. 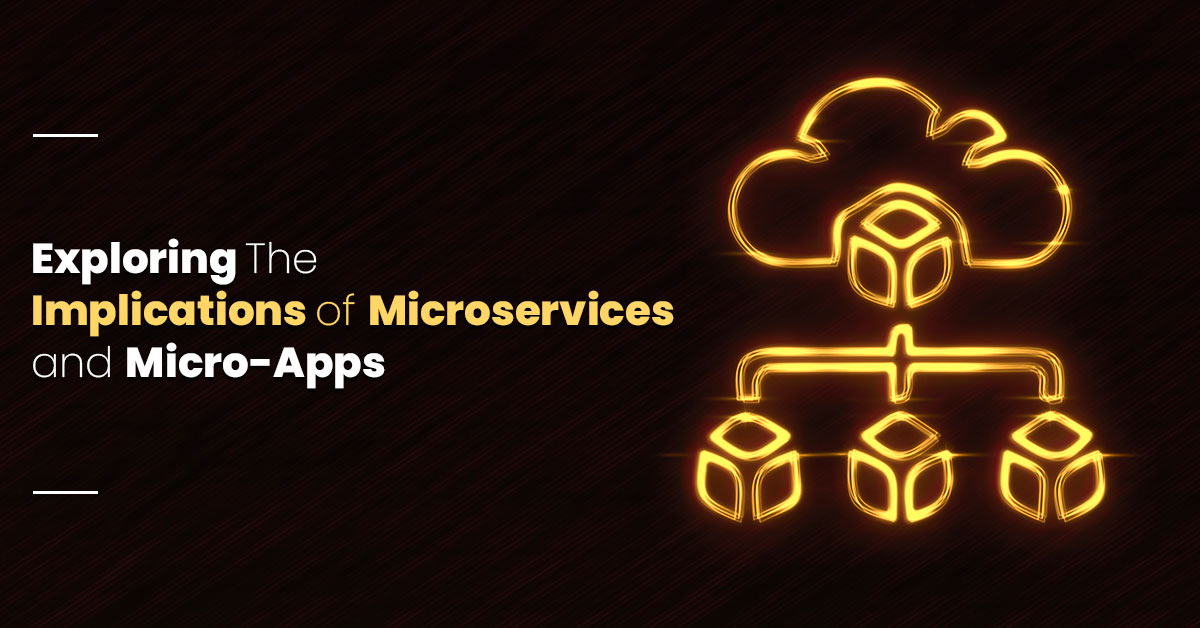 Decoding The Core of Microservices and Micro Apps

Disintegrating an application into smaller, simpler, and functional components is an efficacious way to minimize the complexity of update and development processes. Each of these app pieces can be constructively self-contained, incorporating a few lines of code, all without losing the underlying business logic of the application.

Essentially, there are two distinct approaches that the software development team can take to achieve this type of disintegration today. One of them is to implement microservices development solutions, which emphasizes on converting otherwise heavy and bulky applications into organized, neat, and functional collections of back-end logic.

On the other hand, micro app development enables software developers to dismantle an application’s user interface into similar function-based components. While many organizations may find themselves well served to adopt both these techniques, there still exists some major differences between the two. Let’s take a look at these distinctions to better comprehend how, when, and why these are effective app design and development approaches.

Microservices: Microservices essentially refers to an architectural approach that breaks down complex applications into a collection of loosely coupled, lightweight, and streamlined services. Instead of interacting directly, these services primarily communicate through a combination of event triggers, APIs as well as other integration components.

Since microservices are devised to align with a single business function or responsibility, the overall design principles associated with microservices development solutions dictate that individual services should always remain lightweight.

Microservices are basically the opposites of monoliths, which early used to be the application architecture segment of choice. A monolithic app is made as a single and autonomous unit. Therefore, deploying changes in the application is slow as it affects the whole system, irrespective of how small the changes are. This is because any changes made to any section of code might need the development and deployment of an entirely new version of that application.

Microservices architecture, on the other hand, entails building an application as a host of small services i.e microservices. Each service would run in its own process and will be independently deployable. Moreover, they can also be written in various programming languages or have diverse storage techniques which optimize the role they play in the scheme in the best possible way, making the system extremely flexible, scalable, and easy to maintain.

Micro apps: Simply put, a micro-app is an application that does one thing and it does that extremely well. It is purposely designed to accomplish a single UI-related app task. It has a single focus of operation and is constructed with an aim to get more users in, optimize their experiences as the task is performed, and get that task done efficiently and quickly.

Instead of rewriting the same piece for UI for an application, the development team can configure an existing micro app to suffice their needs. This ensures that there is efficiency across UI/UX elements and it also furnishes a quick route to extend as well as customize individual UIs.

Before the micro app methodology was embraced, traditional business apps would generally consist of a wide array of functionalities, all combined into one interface. Moreover, in spite of how remarkable such applications are designed, their mere size can result in quite a few problems like slow load times, the inability for users to swiftly locate definite functionalities or the sheer amount of business resources and time it takes to construct such applications. Micro apps, on the other hand, removed all the inconveniences and inconsistencies related to traditional apps and provided an easy way to build secure, feature-rich applications.

While there are a plethora of UI types that micro apps serve, many use cases spin around social media and messaging apps. For example, Google Hangouts, Facebook Messenger, and WeChat put a sizable number of micro-apps into play.

Also Read: To Cross-Platform App Development Frameworks To Consider in 2022

Overlaps and Dissimilarities Between Micro-Apps and Microservices

Contemplating the above-mentioned content, microservices as well as micro-apps sound very similar. Both of the app development methodologies seem to decouple complex functionalities into seamless, simple, and more manageable pieces of software. So the question is: why are they referred to as different entities?

Microservices refers to services that run between the front-end as well as the back-end, communicating with one another with REST APIs. Typically, they work under the hood of an application, carrying out tasks that are not instantly visible to the end-users. They provide the developers with the freedom to independently and quickly build and deploy services that perform different tasks, without hindering other running services. It also enables the facilitation of app development services that are custom-tailored for particular tasks whilst assuring fault-toleration.

On the other hand, micro-apps have a UI aspect entitled to them. They are an entire piece of application on their own, which interacts with users in order to perform a single task efficiently. This one application would often be constructed from a number of services, such as microservices, which work in amalgamation to attain the ultimate end goal.

Therefore, it is possible that we have a microapp that empathizes with a single-user interaction task, and multiple microservices work independently under the hood in sync, assuring that the task is completed effectively and quickly.

A simple way to differentiate between microservices and micro-apps is that a single microservice generally doesn’t have a lot of meaning for the end-users. It means that a single user can not leverage a single service to complete a task. In order to make interaction with users, these services would have to be inculcated into an application – a micro-app – working in unison to achieve a unified goal, and that particular goal is the sole purpose of that application.

Microservices and micro-apps both share common merits – they decouple applications into manageable, simple, and independent parts, enabling developers to work on each part in isolation. They also allow the development team to perform code fixes, deploy and update swiftly, without infecting the health of other application parts.

Therefore, if you are running any application built on micro-apps or microservices, you need to focus on designing the monitoring strategy appropriately. If you are looking for end-to-end SaaS app development services, feel free to drop us a line. Our experts will get back to you within 24 hours.

Best Practices of AWS Lambda which you can consider while building Production Ready Lambda's.