Over the years, cross-platform app development has gained a reputation for being one of the most sought-after technical trends. With intuitive digital and technical advancements in today’s increasingly competitive landscape, app developers all across the globe are constantly hunting for frameworks and toolkits that can keep application development cost and time to a minimum.

Owing to the significant benefit it offers, the demand for cross-platform app development frameworks has reached new heights. The core reason behind this surged behest is, it has a wider reach as compared to native apps and because of this, it enables businesses to reach a huge number of users making it a ‘one-of-a-kind-technology’. Nevertheless, cross-platform applications have much deeper market penetration as they can be seamlessly downloaded as well as used by people anywhere using any type of smartphone.

With its increasing popularity, there is a preeminent proliferation of cross-platform app development technologies, tools, and frameworks as well. Therefore, to help you find the best fit, we have carefully curated a list of the top five most popular frameworks which will enable you to expand your business in 2022. 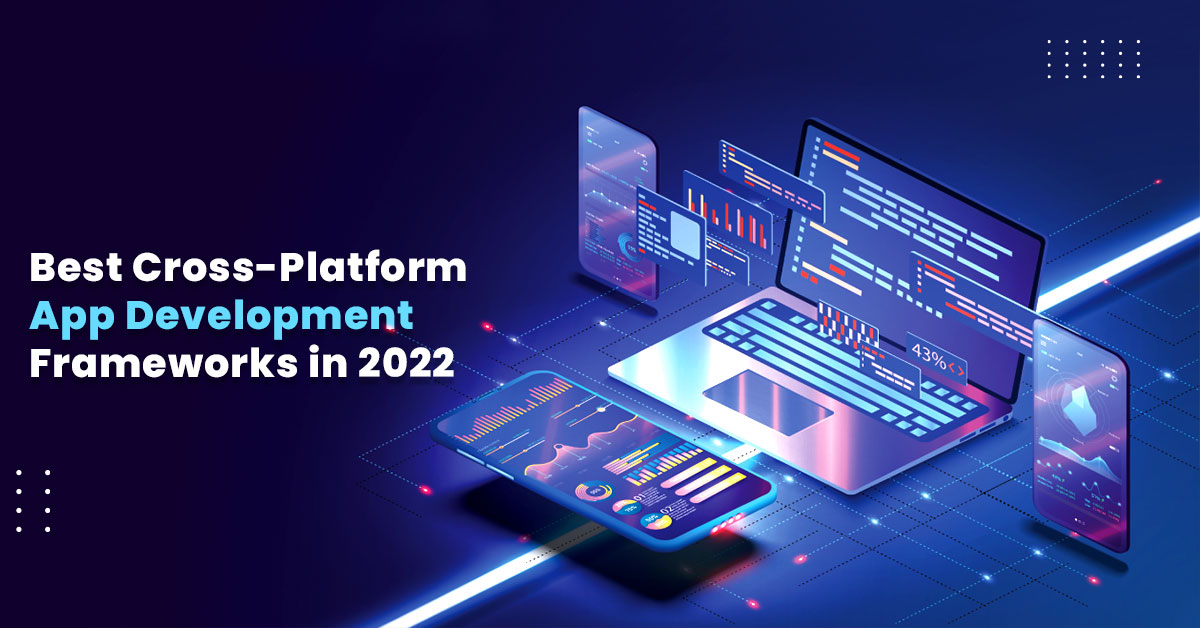 When it comes to listing the most salable cross-platform mobile app development frameworks, React Native is one of the evergreen options in that list. Created in the year 2015 by Facebook, it is no doubt that its community of developers is proliferating by leaps and bounds.

Built on JavaScript, this cross-platform framework does its job well to extend a native-like feel for both Android as well as iOS platforms. As far as app development is concerned, it makes it fairly easy to build neoteric UI interfaces using React Native.

In spite of being based on JavaScript, this app development framework does not use WebView, CSS, or HTML technology. Instead of these, the components of React Native platform inculcate CSS-like polyfills and JSX. Moreover, there is no DOM API in this framework.

One of the biggest USP of React Native is that it fosters the best and most-used features of ReactJS and JavaScript. Furthermore, developers also have the advantage of building some parts using Swift, Java, and Objective-C.

As of December 2021, there were approximately 90,000 Flutter apps on Google Play Store alone, up from 50,000 in 2020. Based on Statista research, 42% of app developers all around the world use Flutter for robust application development. According to Google reports in April 2020, over 500,000 developers used the Flutter framework every month. These numbers have certainly spiked up in 2022, with 10% month-on-month growth in March.

Flutter is a cross-platform, open-source app development framework that was initially released by Google in May 2017. A striking feature that makes Flutter different from others is that instead of JavaScript, it uses the Dart programming language. Because of the hot-reload feature, any modifications in code can be seen in real-time. Along with both Android and iOS, app developers can create neoteric applications powered with ‘Ambient Computing’ for devices such as desktops, smartphones, tablets, smart TVs, and much more.

Based on the V8 Javascript engine, NodeJS is also one of the most-used cross-platform app development platforms. Its USP is to transform JavaScript into a general-purpose language from languages that are highly specialized. It enables the development of server-side and scalable network applications by rendering an open-source environment.

Since the V8 engine can compile JavaScript to machine code rather than executing as bytecode, the Node.JS app development speed becomes extremely fast. This framework also hosts a rich JavaScript modules library and can manage several concurrent connections altogether. Moreover, applications built on this platform are highly responsive.

Xamarin was developed as an individual platform in 2011 before being acquired by tech giant Microsoft. It is an intuitive cross-platform app development framework that is not only open-source but also fosters characteristics that makes it a lot different from other available platforms. Based on the implementation of the .NET platform Mono, Xamarin enables developers to use nearly 90% of the code to construct applications for various platforms. In addition to this, the implementation process also includes its own C# compiler, .NET libraries, and runtime.

An open-source web server, Apache Cordova Server is developed and maintained by a group of researchers, developers, and designers. The open-source Cordova project is basically a fork of the PhoneGap. While they are built with Cordova, they are not entirely web applications. Also, Cordova wraps CSS, HTML, JavaScript, as well as the target framework.

Furthermore, Cordova makes use of standard-compliant API connections like sensors, records, network connections, and the prowess to gain access to different devices.

All in all, while there is a myriad of cross-platform app development tools and frameworks available in the market in 2022, Flutter and React Native are the two most popular and widely-used platforms, followed by Cordova and Node.JS. Because of the massive advantages it offers in terms of convenience, time, and money, cross-platform applications can be efficaciously developed much faster and can be seamlessly deployed all at once on diverse platforms.

If you are looking for web or mobile app development services, feel free to drop us a line. Our experts will get back to you within 24 hours.