A Comparative Study Between WebRTC and HTTP Based Streaming

A Comparative Study Between WebRTC and HTTP Based Streaming

For a long time, lowering streaming latency has been a popular topic. Latencies of tens of seconds, and even one minute, have been known to occur with HTTP-based streaming in the past. With traditional broadcast latency in the single-digit seconds and emerging solutions like WebRTC development services, the question is which approach to take. WebRTC streaming is capable of delivering video not merely in sub-seconds, but in less than 500 milliseconds. It is currently the lowest-latency streaming technology available, enabling a virtually instantaneous transmission.

In this nifty guide, we'll look at how WebRTC works and compare it to HTTP from the perspective of a video streaming service. Let's get started! 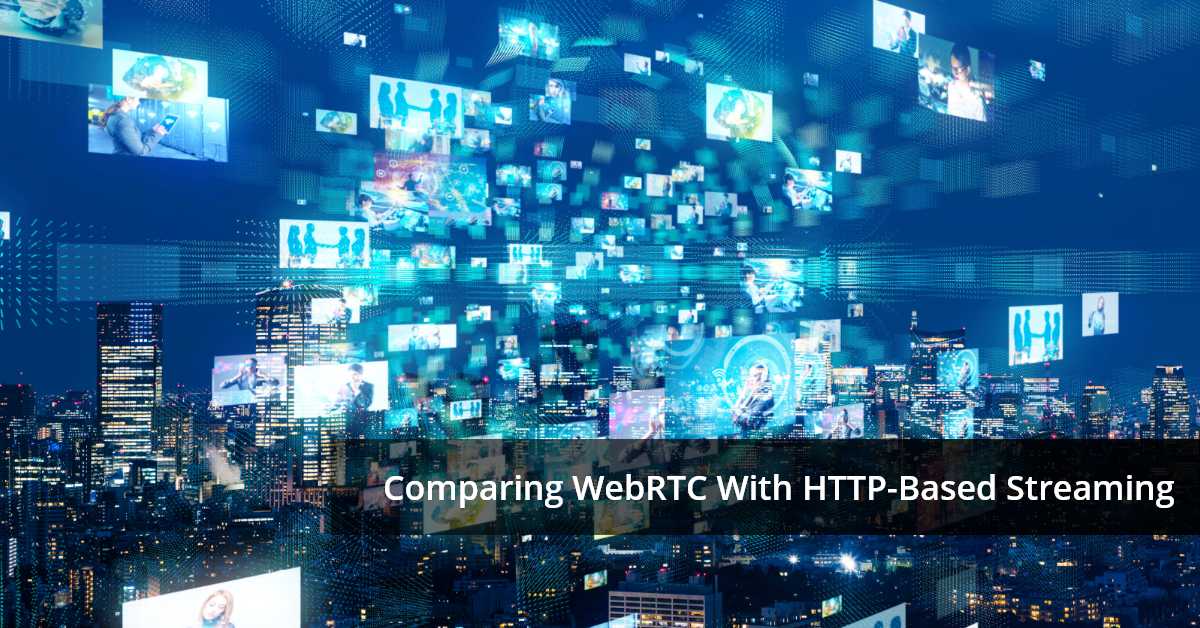 A quick rundown of HTTP based streaming & WebRTC

HTTP-based protocols are technically regular web servers sending out progressive downloads. They use adaptive bitrate streaming to provide the highest possible video quality and viewing experience, regardless of the connection, software, or device. Some of the most common HTTP-based protocols available include MPEG-DASH, Apple’s HLS, Adobe HDS, and Microsoft Smooth Streaming.

WebRTC is a robust protocol that is backed by excellent tools and widespread industry support. It was created to provide applications with real-time communication (RTC) capabilities, allowing video, audio, or any other type of data to be transferred between peers. This is a key distinction between the two when compared to HTTP-based streaming, which is client-server oriented.

The main distinction between UDP and TCP is that TCP requires a three-way handshake while transmitting data. The initiator (client) requests that the acceptor (server) establish a connection, the acceptor answers, and the initiator acknowledges the response and maintains a session between the two ends. Therefore, TCP is extremely credible and can deal with packet loss and ordering.

UDP, on the other hand, doesn’t require a handshake to begin. It transfers data regardless of bandwidth constraints, which makes it both faster and riskier. Because UDP does not support retransmissions, packet ordering, or error-checking, a network hiccup has the potential to contaminate the data in transit.

Protocols like WebRTC often use UDP, whereas HTTP-based protocols use TCP.

How does WebRTC stack up versus HTTP-based streaming?

When comparing the two solutions, there are a few key questions to consider:

The answers to the latency questions are dependent on the latency range you are aiming for.

The new and enhanced HLS such as LL-HLS and LL-DASH has a 3 second or less latency. This is still considered fast, and it will suffice for the majority of low-latency use cases. WebRTC, on the other hand, remains the fastest solution if your use case necessitates real-time streaming. Since it's a UDP protocol developed to fully adapt to the modern internet. It supports 500ms of real-time latency.

WebRTC was designed to provide bi-directional, real-time communication. Unlike HLS, which is based on TCP, WebRTC is based on the UDP. This means that WebRTC can begin without the client and server exchanging any handshake information. As a result, WebRTC is faster, but it also makes it more susceptible to network fluctuations.

WebRTC is the protocol to employ if your solution requires peer-to-peer, real-time streaming. However, if you need to grow your audience above 50 people, you'll need to reconsider your strategy.

Compared to HLS, scaling WebRTC is substantially more difficult. However, this can be solved with a hybrid workflow. Your choice will be determined by your use case and target audience size.

When it comes to reaching massive audiences, HTTP-based protocols come out on top. While “CDNs” for WebRTC do exist, the cost is often prohibitive.

WebRTC is a free and open-source protocol. But remember how we talked about WebRTC scaling? It's entirely possible, and it works effectively in many use cases - but it's not cheap. If you don't need to stream to hundreds of people, WebRTC is a great option. However, if you want to reach a large audience, you'll have to spend money on additional servers to lessen the burden on the browser.

HLS is perhaps the most cost-effective video delivery method. Scaling with a CDN is easily justified from a cost standpoint because it employs affordable HTTP infrastructures and current TCP-based network technology.

In the last couple of years, HTTP-based protocol and WebRTC have come a long way. Despite the fact, they are both cutting-edge technologies that are propelling the industry forward, each has its own set of advantages and disadvantages. Neither choice is ideal for everyone, but one of them may be the best fit for you.

In the end, the optimal protocol will be determined by the characteristics of your project, the devices to which it will be distributed, and your audience scale. When developing a low-latency solution, keep these things in mind.

Curious about finding the best solution for you? Get in touch with our live video streaming experts!

The Future Implications of OTT And Connected TV

The COVID-19 pandemic has further propelled the future of Over-The-Top or OTT streaming services and Connected TV or CTV as a whole.

Businesses of all shapes and sizes are positively responding to the increasing demands for advanced real-time video conferencing solutions.

With HLS Streaming, broadcasters can now deliver low-latency and high-quality video streaming services to their user-base in a more reliable and faster form

The Importance of Integrating Real Time Features In Your App

The core objective of integrating real-time features in web and mobile applications is to offer effective and immersive data to users.

With tons of features and easy accessibility, the music streaming apps have aced the personalization segment and have garnered millions of active user-base.