Web3 and Web 3.0 Technologies Are Different: Here Is Why

Ever since the COVID-19 pandemic plagued the entire world, there has been a remarkable shift in business operations and related workflows. Nevertheless, the explosion in intuitive technologies and the advancement of existing enterprise software systems have further led to new innovations and tech progression, enabling businesses to transcend the boundaries of centralized operational infrastructure. For instance, the internet – the comprehensive network of networks connecting computer systems and mobile devices worldwide has undergone colossal infrastructural and technological modifications in the past few years. Similarly, the web – elaborated as the world wide web has evolved subsequently from its initial static page model to the advanced, interactive version as well see today.

The grouping of these next-gen technologies has often been perceived as a concrete sign of the emergence of a new iteration of the web, which entails concepts such as decentralization as well as token-based economics.

However, as the internet is marching towards its third iteration, many are confused about the difference between web 3.0 and web3. Although a majority of discussions around these topics imply that both are the same, the truth is that they are surprisingly different. While web3 is a blockchain-based, decentralized version of the web, web 3.0 essentially highlights Tim Berners-Lee’s notion of a linked or semantic web.

In this blog, we will shed some light on how web3 and web 3.0 concepts are different and elaborate on their functional aspect and potential use cases. So, let’s get started. 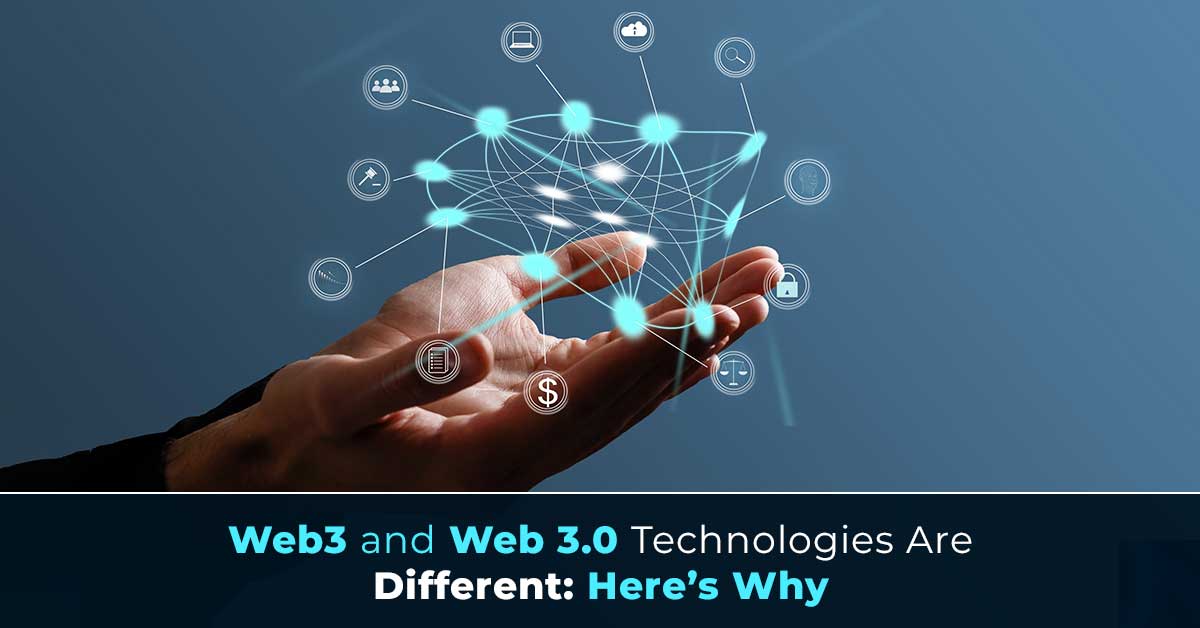 Web3 or the decentralized web

The vision: Coined by Ethereum co-founder Gavin Wood in the year 2014, the cardinal idea behind web3 is to fight and curb the centralized power, governance, and dominance of a handful of web2 giants such as Google, Amazon, or Meta (earlier Facebook) by constructing a decentralized version of the internet.

What does it mean: The first iteration of the internet – Web1 – was preeminently read-only and static. The second one – Web2 – was and still is a more social and interactive version that enables users to design, create, and share their own content on the internet. However, the dark and usually sidelined aspect of this Web2 approach is that only a handful of platforms own, manage, and control the data of their users and can effectively manipulate them in a certain manner that is not always considered democratic or even ethical.

And that is exactly what the web3 technology intends to solve.

How will it solve the existing challenges: Through robust and interoperable blockchain networks, self-sovereign identity, and decentralized storage in a community-driven setting, web3 will fundamentally take away the data ownership and centralized user data accessibility from web2 giants and ultimately give it back to the users – where it should ideally belong. Therefore, the entire authority would be bestowed upon the users to decide who can get access to their data as well as to their identity.

Blockchain at the core: Simply put, blockchain is an advanced and efficacious system of recording a timeline on a distributed ledger in a certain way that makes it impossible to trick or change. This is because each transaction is synchronized across an entire (more or less) decentralized and secure network of computer systems.

How would this work: Intrinsically, users will have the access to keep encrypted keys to all their private data and identity details in a decentralized wallet such as Venly, TrustWallet, or MetaMask. This subsequently enables them to interact with other types of blockchain-powered applications and select who can and can not read their data. Moreover, signing in with a blockchain wallet is functionally a lot like signing in with a Meta (Facebook) account on other apps, however, in this case, you own and control all of your data.

Web 3.0 or the semantic web

The Vision: The inventor of the world wide web, Tim Berners-Lee, intended to connect everything on the expansive web at the data level to unleash its full potential.

What does this imply: In the current architecture of the internet, we have navigable links or URLs. These links are designed to connect documents with one another. Please note, that these are documents, not facts or raw data. The final outcome is that you end up with information silos. To furnish a simple example, consider this: if you change jobs and update that info on LinkedIn, your Facebook details will not be changed or updated since they are not linked.

Tim Berners-Lee wanted to connect all of this so users would have to update details only once. It would ultimately result in more accuracy and intelligence.

How does it work: The semantic web solution is predominantly designed to store all of your data in one place – Solid pod. This enables users to determine which people and app can access their data. Additionally, a WebID is added so that users can identify themselves on the web.

The Differences and The Similarities Between Web3 and Web 3.0

After considering the above statements, it is clear that both web3 – the decentralized web and web 3.0 – the semantic web – seek to offer an alternative to the existing web infrastructure.

However, they have an entirely different focus.

Web 3.0 or the semantic web emphasizes efficiency and intelligence, by linking and reusing data across different websites. On the other hand, web3, or the decentralized web focuses entirely on empowerment and security: by providing power over data as well as identity back to users.

More importantly, they leverage a different set of technologies to get there. For instance, web3 is entirely constructed on the blockchain and web 3.0 utilizes robust data interchange technologies like OWL, SKOS, RDF, and SPARQL. A pivotal consequence of this distinction is that data in web3 is difficult to change since it is distributed to the entire blockchain network whereas data in web 3.0 is easy to update and change.

Considering the similarities, both are structured in a way that they keep the user data safe, secure, and under the full control of the user. In the scenario of the semantic web, this data is placed in a Solid pod in a centralized manner. In the case of web3, this data is saved in blockchain wallets in a decentralized setup.

Looking For Web3 App Development Services For Your Business?

At Oodles Technologies, we offer comprehensive Web3 and metaverse development services to enterprises across various industries such as real estate, healthcare, eCommerce, education, travel & tourism, FinTech, and more. As an established blockchain, web3, and metaverse development company, we assist businesses in overcoming the complexities of centralized infrastructure and architecting robust, scalable, interoperable, and decentralized web3 applications for profound use cases. Our seasoned app developers are proficient in various new-age blockchain networks such as Ethereum, Hyperledger, Cosmos, IPFS, Solana, Theta, Polkadot, and more, thereby enabling enterprises to traverse the in-demand blockchain-based app development journey with utmost ease and convenience. If you are looking for web3 decentralized application development services, feel free to request a free quote. Our team will get back to you within 24 hours.

The most pivotal aspect that you need to understand about phygital NFTs and their marketplaces is their examples and use cases.