Known as one of the most sought-after and efficient high-level programming languages, Python has garnered tremendous fame over the past few years. Its soaring popularity has enabled it to transcend the boundaries of web development and dive into some of the most talked-about and multifaceted processes such as artificial intelligence, machine learning, data science, etc.

According to Statista, Python is ranked in the top three positions in terms of web development programming languages. It comes with a multitude of built-in libraries, many of which are for artificial intelligence and machine learning. This is the broad reason why it makes using Python for AI-based web development crucial for every business.

Moreover, with its continual increase in dominance over other programming languages, its demand for artificial intelligence in web development has proliferated. As a result, Python has become an indispensable part of various industries such as education, eCommerce, healthcare, banking & financial services, automation, marketing, manufacturing, and agriculture, just to name a few.

In this blog, we will elucidate the benefits of using Python for artificial intelligence in web development and how it is significantly empowering businesses across a myriad of industries to harness the power of AI in their projects. So, let’s get started. 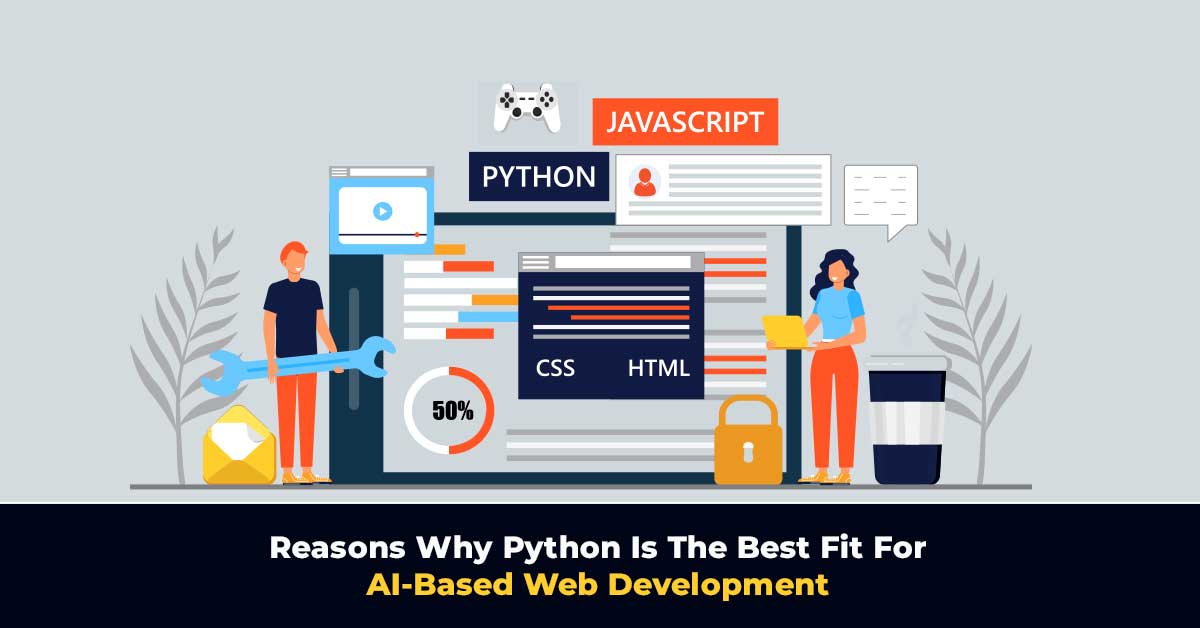 One of the most significant advantages of using Python amongst other programming languages is that it entails various prebuilt libraries for different AI-based applications, websites, and projects. Some of these libraries include:

Apart from these, there are also other Python AI libraries such as Norvig and AIMA which can be leveraged for implementing algorithms in artificial intelligence. In addition to this, these dedicated inbuilt libraries prove to be extremely useful for developers and help them save time, cost, and effort.

Furthermore, Python is compatible with a lot of major platforms and OS such as Windows, macOS, Linux, etc. It can also be utilized to make independent applications or software on other platforms which implies that they can be effectively appropriated and utilized on different frameworks without needing a Python translator. There are certain libraries that PyInstaller that helps developers to prepare their codes and run on various OS. Yet again, all these processes make it exceedingly simple and convenient by saving the time, effort, and money needed to run as well as test a single program on multiple platforms.

Since Python is a dynamically typed programming language, it is very flexible. In simple terms, it means that there are no ‘hard and fast’ rules outlining how certain attributes or features need to be built.

Python also furnishes more flexibility and scalability when it comes to solving problems, which is great for beginners as well as experienced web developers alike. It is also well-suited for any type of web or app development purpose, with options to select between a scripting and OOPS approach. Python works as an ideal background language and amalgamating different data structures is also acceptable for web development and AI.

As we already mentioned earlier, Python extends an assortment of libraries out of which, some are exceptionally remarkable choices for visualization. For AI developers, it is imperative to emphasize that in the ML, AI, and deep learning approaches, data should be presented in an intelligible configuration that is easily read and understood by humans. Libraries such as Matplotlib allows data scientists to assemble plots, histograms, and graphs for better information representation, perception, and viable demonstration. Apart from this, a multitude of distinct APIs disentangle the visualization process and altogether, this makes it easier and hassle-free to make detailed reports.

A majority of web developers across the globe incessantly select Python for AI development projects because there is less code to work with. To put this into a broader perspective, when compared with other programming languages such as Ruby, Java, and Simula – the very first object-oriented programming language, Python can efficaciously implement the same logic with one-fifth of the total amount of coding actually required.

While there are various algorithms involved in AI-based programming, the ease of testing offered by Python makes it one of the most effective frameworks among competitors. Moreover, this programming language makes it much simpler to execute the required codes, and therefore, it takes less time to finish the dedicated project.

Benefits Of Choosing Python Over Other Programming Languages

Looking For AI and Web Development Services For Your Business?

At Oodles Technologies, we provide comprehensive digital solutions for software, application, and web development equipped with next-generation technologies such as artificial intelligence, blockchain, metaverse, ERP, and more. As an established website development company, we offer in-depth assistance to startups, SMEs, and global brands to overcome the complex challenges of business operations through robust digital transformation services. Our in-house team of seasoned professionals guides entrepreneurs and business owners through every step of the web development process such as project conceptualization, web design & development, API integration, app migration & support, frontend & backend development, server setup, deployment, testing, launch, and comprehensive website maintenance and support. If you are looking for Python-based AI and web development services for your project, feel free to drop us a line. Our experts will get back to you within 24 hours.