An MVP can be described as a simpler version of the software that can effectively solve your problem. Since the software development time needs to be as short as possible, enterprises waiting long enough to develop these products are prone to high competition. As a result, they may end up losing their strategic edge in the industry. Nevertheless, with a working version of the software, businesses can rightfully approach their investors.

When you have an MVP, validating business ideas becomes a lot easier. Moreover, when you run a test with the help of an MVP, it can prevent organizational failures as you can retrieve feedback and evaluate the needs of your customers. The most crucial characteristics of an MVP are: 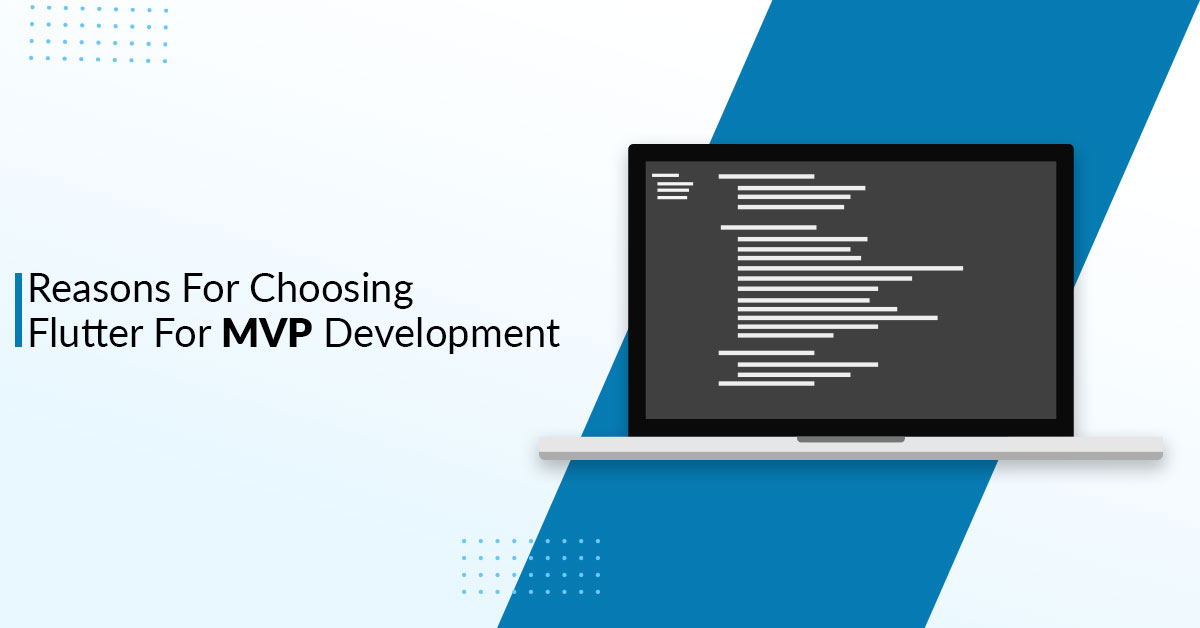 What is Flutter & How Can It Help in MVP Development?

As a cross-platform development framework, Flutter was devised with an objective to build native iOS and Android apps by using a single code-base.

It was launched in December 2018 and ever since Flutter has grabbed the attention of several software and mobile app development companies. It comes with the added advantage of enhanced features, bug fixes, and widgets. Since it is open-source, Flutter immensely complements the viability of MVP development.

The main reasons why Flutter has witnessed a huge surge in popularity and demands are:

The dedicated widget engine in Flutter attracts UI components that have a striking resemblance with the native ones.

What Makes Flutter A Better Choice For Building An MVP?

Flutter can rightfully facilitate the development of budget-friendly and cost-effective MVPs in profound ways. The availability of widgets makes mobile app development using Flutter easy as developers can seamlessly integrate and deploy the changes.

In the process, app developers can skip the complicated decision-making process associated with business platforms while creating a cross-platform application. Hence, you can get feedback from a lot of respondents, making MVP development very crucial for startups.

Flutter also relishes astonishing compatibility with Firebase. This truncates the need for having a separate backend for creating a simple MVP.

Ways in Which Flutter Can Help in MVP Development

Mobile app developers get to work on certain unique features with Flutter, which they can’t enjoy elsewhere. The easy integration, performance, speed, and flexible user interface are some of the core reasons for its huge demand and popularity.

Cost constraints have always been a key hindrance for startups and companies willing to launch new applications. However, Flutter has resolved this issue as it is open source and comes free of cost.

Thanks to Flutter, mobile app developers require less time while building a finished product. It is equipped with the hot reload feature which assists developers to spontaneously view the changes that have been made to the app coding.

Flutter also extends a seamless collaboration between developers, designers, and testers, whenever they require any immediate changes, enhancing the look and feel of the app.

The hot reload attribute also allows developers to fix bugs and add new features within minutes. Thus, the experimentation journey becomes faster since the new version of the app does not need to be entirely coded.

For businesses of all shapes and sizes, it is crucial to attract investors with feasible ideas that may convert. Flutter is stacked with an enriched collection of interactive designs, UI features, and the latest technology. This grabs the attention of investors and prospective customers alike.

Moreover, Flutter supports widgets that assist developers in app customization whenever needed. The SDK supports Cupertino and Material Design, an assortment of visual, behavioral, and motion-related widgets that furnish a compelling look to the applications for both Android and iOS devices.

Just like every piece of software, MVPs have their own distinctive features. Since the community of Flutter enjoys direct Google support, it is vast and ideal enough to support any type of product development.

Also, building robust, scalable, and high-performing mobile apps needs comprehensive support from SDKs such as Flutter. It can seamlessly fit into the varied needs of developers and offer a plethora of customizable opportunities. If you are looking for custom mobile app development solutions, feel free to drop us a line. Our experts will get back to you within 24 hours.