The increasing number of smartphone users has provided the app industry with lucrative opportunities. According to Statista, approximately 218 billion apps were downloaded in 2020. It comes as no surprise that the mobile application market is thriving, and many predict that new business owners and startups will continue reaping the benefits and high profits in the future as well.

However, mobile application development is easier said than done! The foremost decision that you’d have to make as a developer is which framework or programming tool to use to build a robust and glitch-free app. One option you might ponder over is to use React Native. 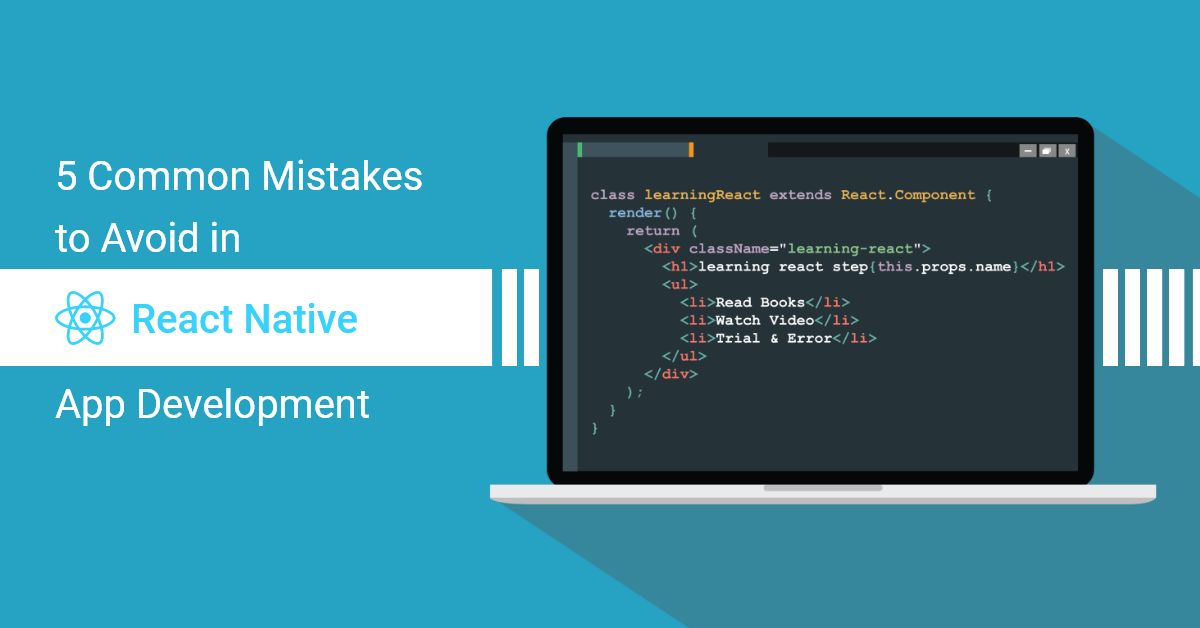 Developed by Facebook, React Native is an open-source mobile app development platform that was launched in 2015. As compared to other cross-platform mobile application development frameworks, React Native has proven to be liked by many developers. This is because it allows them to build high-quality apps for both iOS and Android at the same time.

Layout for Android and iOS version- There will be a number of reusable components, but there will also be different layouts. In fact, the basic structure of the application page for iOS and Android can be entirely different.

Forms- You should also consider estimating the validation layout. When you build an app in React Native, it is common to underestimate the number of codes you should write. The mistake usually happens because when you create hybrid applications on platforms such as Cordova, you’re required to write fewer codes.

In React Native App Development, these incorrect estimations can cause a lot of hassle to the developers.

The Redux tool helps in the proper and effective management of an application. It also enables you to properly store the data gathered by the app. Primarily, Redux is used for managing heavier and larger applications.

Although React Native makes use of Redux, you must plan it seamlessly to prevent any issues. Using it more can also increase the workload significantly. You should also avoid using it for small projects. Why? Because it requires you to write complex and long codes even for the smallest changes. Therefore, if you are creating small-scale apps using React Native, it is recommended to not use Redux.

Undoubtedly, app development is a tedious, complicated, and time-consuming process. The best way to reduce the hassle is by using external modules during app development.

Since external modules already have completely formed codes and tend to come with documentation, it boosts the process of app development. However, a common mistake is to not read all the codes that it consists of. Oftentimes, when you add external modules to your codes, they may break and not perform the assigned function. This can end up in adding more to your workload instead of reducing it. Therefore, we recommend you read each and every code in order to identify any errors and solve them before applying them to the app.

When creating a React Native App, not writing a testing unit is the most common mistake to make. This is because the created application can still function irrespective of whether you write testing units or not.

Instead of leaving your application to be downloaded and judged by the users, it is suggested to test its functionality and make sure that it is glitch-free before launching in the app store. This is where unit testing comes into play.

A unit test enables you to assess several features and parts of your app independently. Doing so will guarantee that each functionality and attribute works as expected. By writing the unit testing in the development phase, you can spot bugs in your app and take measures to remove them.

Optimizing the images in applications that are built with React Native should be a high priority. Doing so will assist you in resizing the images locally and then later uploading them to cloud storage such as the s3 by server and then obtaining the CDN link that can be returned using API. These processes will help in making the image loading process faster.

There are several other mistakes that developers can make during the stages of React Native App Development. However, the aforementioned points are the most common ones that you should always avoid at all costs. If you amalgamate a well-built application with a well-designed and positioned one within the niche, you are bound to garner higher usage results with high number of downloads. For further information on mobile and web app development, contact our team of experts.