Illustrating Top Megatrends That Shapes The Future Of Metaverse

Top Megatrends That Entails The Metaverse

In such a brief time, the metaverse has evolved to be such a behemoth. Initially originated as just a mere idea in 1992, it has massively progressed ever since. It is an alternate reality in which the virtual and physical worlds amalgamate to coin a metaphor for the real world.

Undoubtedly, the metaverse has caused a colossal stir among technophiles and innovators such as Mark Zuckerberg as well as the entire Silicon Valley. Since its launch in the year 2003, it has become a buzzword and mega boom as a result of innumerable interested investors. Not only the landscape of social connections but several other industries such as media, entertainment, healthcare, and gaming sectors have been immensely hit by this new technological wave. For instance, online games such as Fortnite have already started to inculcate metaverse elements to provide immersive and other-worldly experiences to their huge user-base.

Nevertheless, after the pandemic engulfed the entire world and stringent lockdowns were imposed, many people have enclasped the internet as their primary source of social life. As a result, the virtual world has been developing and taking its true shape even faster. Moreover, as it matures and grows, the concepts that govern it as a whole will become more and more refined. A plethora of megatrends around the metaverse has come about as the world adopts, embraces, and diversifies the futuristic landscape.

In this article, we will take a brief look at some of the biggest trends that are constructing the future of the metaverse. Let’s begin. 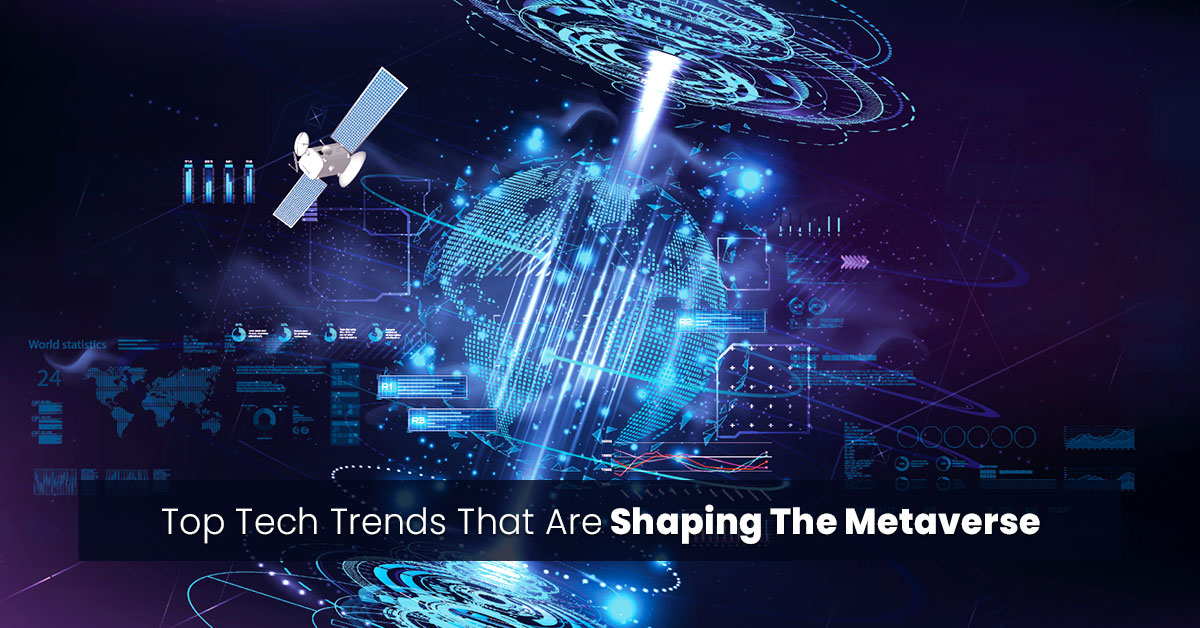 The Emergence of Cybernetics

Cybernetics is the term that defines the integration of human sensory and motor systems with superlative machines i.e. computers. The existing devices are relative examples including video game output/input devices, smartphone accelerometers, wearables, and VR headsets.

High-speed networking and miniaturization have altogether transitioned devices from stagnant or stationary workstations to mobile supercomputers in our hands and pockets. All in all, these mega computers are getting closer and closer to our human bodies.

These devices will preeminently interpret our voice instructions, our biometrics, and our gestures. Moreover, neural interferences may even enable these devices to contemplate our intentions, perhaps even quicker than we do ourselves.

The Rise of Digital Assets

Among investors and techno-geeks, digital commodities have become quite a favorite asset. Metaverse and NFTs are already super-connected, especially in blockchain gaming as well as other interoperable games where the users are required to take on the role of value carriers inside the expansive digital & virtual social mediums.

Non-Fungible Tokens have the potential to disrupt the traditional social networking paradigm based on user-interaction, transaction, and socialization in the metaverse. Holding particular NFT can signal a user’s support of any project or transfer and share perspectives about the real and virtual world.

This enables like-minded people that are holding such NFTs to band into the relevant communities and share experiences along with creating content together. One such example of NFTs are the ever-trending NFT avatars.

Also Read: The Amalgamation Of Metaverse And eCommerce

In the current era, people are increasingly referring virtual world to be as real as the existing physical world.

We we look at it closely, in the physical world, trust is how organizations, relationships, and institutions function. It is the sole basis of how diverse businesses flourish within the legal frameworks, how our financial market continues to operate as well as the form of measure for all our connections. In this imperative to say that trust has made each of these systems functional and scalable.

As trust continue to be a prominent part of the metaverse and increase in the ‘virtual’ world– with virtual assets, online friends, live online experiences, and smart contracts– it will further boost the scalability of the metaverse and also the industries that openly support it.

With the evolution of technologies, 5G networks are projected to drastically improve consurrency, mobile networking speeds, and latency by the order of several magnitudes. Well, needless to say that 5G is not the end of the road. A much powerful update i.e. 6G will amplify these metrics by nearly 10-100 times. Moreover, we will witness 10 Gbps speeds with latency reduced to 1ms in the coming years.

The mega accelerating speeds are vital for supporting the metaverse. However, it is actually the network effects that occurs when all the participants inside a particular network are able to convey and share live/real-time data that fuels some of the most intuitive applications.

For many years, the way that nearly every game with 3D graphics produced real-time imagery was primarily via a collections of hacks known as shader programming. Moreover, ray tracing utilizes the core physics of light to further simulate how the images appear on the basis of how photons bounce through and between different materials. Ray tracing can altogether build far more realistic and beautiful images- this is the reason why it is used for pre-rendered digital content such as videos and movies, however it causes an enormous rise in the processing power.

For the metaverse, the real-time raytracing is still on its way. We will not simply have IoT or the Internet of Things, but rather we will have Internet of Everything, that is essentially integrated with AI, predictive analytics, and real-time visualization. These next-gen innovations will encompass and predict the real world, while also powering the gaming generation based on actual physics- far more immersive and beautiful than anything experienced so far.

The metaverse and Web 3.0 innovations will undoubtedly revolutionze the way we interact, socialize, play, and work. The megatrends that we have shared in this blog are testaments to the possibilities and opportunities that the metaverse presents to our future ahead.

If you are intrigued by the potential that metaverse implementation solutions hold or if you are looking to discuss your project requirements with our experts, feel free to drop us a line. We will get back to you within 24 hours.