How Multichain Blockchain Development is Gaining Dominance in 2022

Blockchain: an ecosystem that was once elucidated with its exclusivity and tight-knit community has now reached businesses, institutional investors, governments, and entrepreneurs who are swiftly becoming more affirmative about the ever-evolving tech space.

It is estimated that the blockchain industry market size will hit the mark of more than $21 billion by the end of the year 2025. With its soaring popularity and demand, we have now come to a stage where the number of users leveraging the decentralized technology has outreached the functional aspects of the blockchain ecosystem. Subsequently, this has resulted in increased demand for solutions and partially congested networks.

Many of these roadblocks can be easily solved with scaling solutions such as parachains, bridges, and other features that rely entirely on a shared vision of a multichain approach and formulate seamless transitions for Web 3.0 users and fuel the next wave of blockchain adoption.

In this blog, we will shed some light on how multichain blockchain development will gain dominance in 2022 and in the years to come. 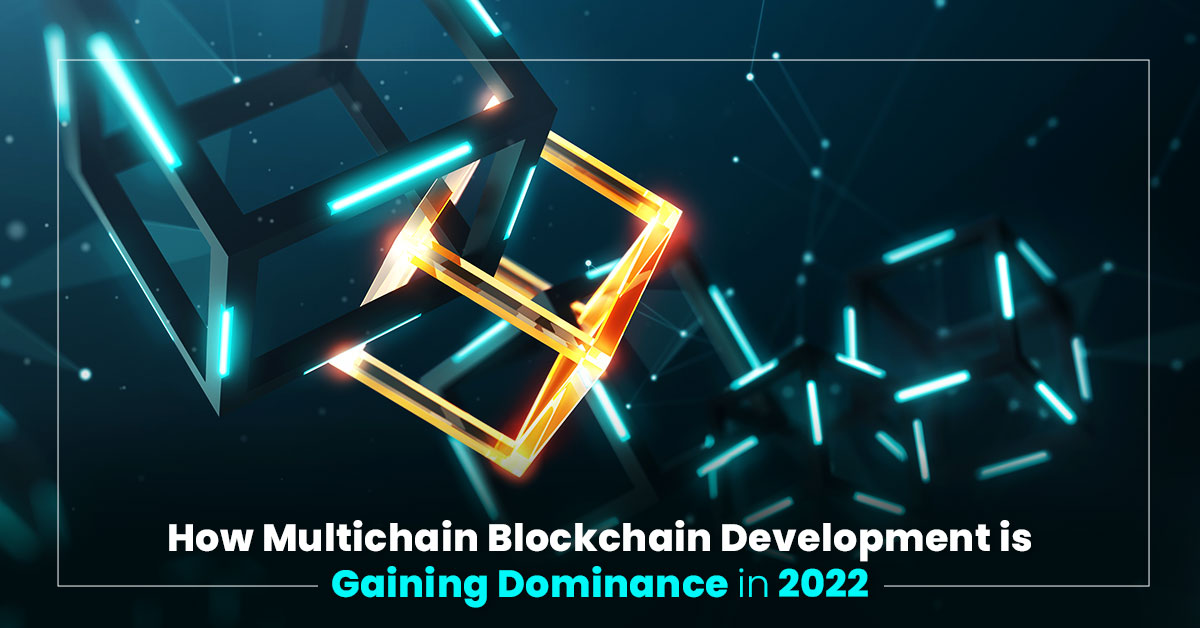 Why a Multichain Future is Absolutely Crucial?

To evolve into a core, high-growth industry, the blockchain sector will most likely have to embrace the coexistence of several chains. As of today, a majority of blockchain scaling solutions are adopting a multichain approach. Moreover, the increased demand for Layer 2 scaling on Ethereum, as well as other Layer 1 blockchains, far outruns the scaling of the Ethereum blockchain itself. But most innovations are still taking place on the Ethereum base layer. The question here is – how long is this going to stay like that?

The answer is – the recent emergence of blockchains such as Cosmos, Solana, Binance Smart Chain, and Layer 2 solutions like Polygon are incessantly quick at catching up and solving a majority of the scaling challenges that accompany building DApps on Ethereum. Furthermore, contrary to the common rhetoric, these solutions are NOT being built or implemented to “kill Ethereum” but to furnish a multichain approach for architecting Web 3.0.

The seamless interconnection of blockchains would indubitably come with the additional upside and merits like quicker and easier onboarding of users, especially in the non-tech fields.

Also Read: Here Is Why The Metaverse Cannot Exist Without Blockchain

Over the last few years, there have been significant developments and innovations in the multichain approach. These blockchain app development solutions are strategically aimed at enhancing scalability, which further allows for better network throughput and increased transaction speeds along with the reduction of fees.

Moreover, these protocols also make it fairly easier to build and run decentralized applications while assuring safety, privacy, and efficient interoperability with other blockchains.

The continually expanding Cosmos ecosystem is being regarded as the “Internet of Blockchains”. Blockchains that are built and launched on the Cosmos network can seamlessly interact with one another with Cosmos Hubs which leverages IBC or the Inter-Blockchain Communication protocols. To date, over 300 decentralized applications have been developed and launched on the Cosmos network, with an overall asset capitalization of more than $161 billion.

The pivotal attribute of the Cosmos Hub blockchain is cross-chain solutions that enable any blockchain launched on the Cosmos ecosystem to efficiently and securely interact with one another as well as any external blockchains.

The IBC protocol as mentioned above allows for interoperability and data transfer between blockchains. Moreover, the entire Cosmos ecosystem runs on the POS or Proof-of-Stake algorithm which is not typically compatible with POW or Proof-of-Work blockchains. However, due to the availability and usage of Peg Zones, this challenge also has been solved with Cosmos, which focuses on achieving interoperability across every existing blockchain.

Polkadot is essentially a multichain technology that leverages its parachains for secure and fast exchange of data between various blockchains. It is intuitively designed for a truly resilient blockchain network, i.e. it can efficaciously adapt and update without any forks.

The sole mission of Polkadot is to aid in connecting public and private blockchains as well as other networks in the Web3 ecosystem. Furthermore, independent blockchains can interchange transactions and information via Polkadot, making it a true and reliable project of the future – amalgamating the Internet of Things, digital worlds, and network decentralization.

By fusing various highly specialized chains into one interoperable and scalable network, Polkadot enables the blockchain technology to reach its full potential and power real-world blockchain use cases. Altogether, it helps in constructing new infrastructures while balancing the scale of future decentralized digital economies.

The Polygon network was devised to make Ethereum interoperable with different blockchains. Polygon Network Sidechains enable users to make fast and cost-effective transactions on the Ethereum blockchain and additionally helps in offering scalability and reducing overall congestions associated with it.

The Polygon SDK is the linchpin of the entire Polygon ecosystem. It is an efficient and flexible modular framework that allows the launching of new blockchains using different scaling technologies. On this basis, blockchain developers can create feature-rich, robust, interoperable, and reliable decentralized applications. Nevertheless, it makes it easier for developers to build and deploy their blockchains on Polygon, thereby, further making it automatically compatible with Ethereum.

The Polygon team has also constructed the Plasma Chains scaling model along with the Ethereum Matic PoS sidechain based Proof-of-Stake. Furthermore, it is compatible with the Ethereum Virtual Machine (EVM), enabling Ethereum-based blockchain projects to freely move smart contracts to this blockchain network.

Just like Cosmos and Polkadot, the Polygon Network also aims to bridge the gap between various blockchains by enabling them to act like a huge, interconnected network and allowing seamless communication between several decentralized products and services.

How Would The Future of Multichain Blockchain Development Look Like?

Let’s suppose, if Ethereum were a city, it would be relatively big and congested. In comparison to that, other chains would be the suburbs, less busy, but also less intuitive and less lively. In order for both situations to evolve and prosper, the inner cities and suburbs need to grow together. Interoperability, scalability, and fast & secure communication between the two would mitigate the most pressing challenges and empower them for future growth.

Similarly, for Web 3.0 to grow, multichain blockchain development is the only solution that would deliver a frictionless experience and eliminate complex transactions for the users.

Oodles Technologies is an established blockchain app development company that has been enabling businesses across all industries to harness the power of blockchain technology and build intuitive solutions with next-gen blockchain networks. With an industry-scale experience of more than 10+ years, we have designed, built, and launched a myriad of decentralized apps, smart contracts, NFTs, and metaverse projects on top blockchains such as Ethereum, Hyperledger, EOS, Cosmos, Solana, Polygon, IPFS, and more. If you are looking for professional blockchain app development solutions, feel free to connect with us. Our team will get back to you within 24 hours.

The most pivotal aspect that you need to understand about phygital NFTs and their marketplaces is their examples and use cases.