How Artificial Intelligence Will Shape The Future Metaverse

The Metaverse and Artificial Intelligence

During the time of the global pandemic, the world witnessed the greatest technological advancement than at any other time in history. Aside from bringing rapid advancements throughout many aspects of our daily life, the last two years have seen a massive spike in user interactions in the online realm.

Riding on this sudden surge, a slew of investments in virtual reality (VR) and augmented reality (AR) technologies have emerged, laying the foundation for the recently coined term "Metaverse". This shared digital world extends our creative abilities beyond the scene and enables us to communicate directly with virtual elements in real-time.

Metaverse has captured the attention of each and every tech titan and has quickly risen to become the latest craze in the tech world. A lot of companies have already expressed their interest in working on creating a slew of new services for this new digital world, incorporating various technologies such as AR, VR, 3D animation, blockchain, and AI, among others.

The comprehensive and extensive applications of Artificial Intelligence (AI), on the other hand, are yet another evolving technique that is breaking the manacles of intelligence in the virtual world.

Artificial intelligence (AI) has the ability to decode massive amounts of data at breakneck speed in order to produce additional insights and drive action. AI is significantly altering the context and perspective of augmented reality. Incorporating Artificial Intelligence (AI) into metaverse opens up an entirely new world of digital interactions. 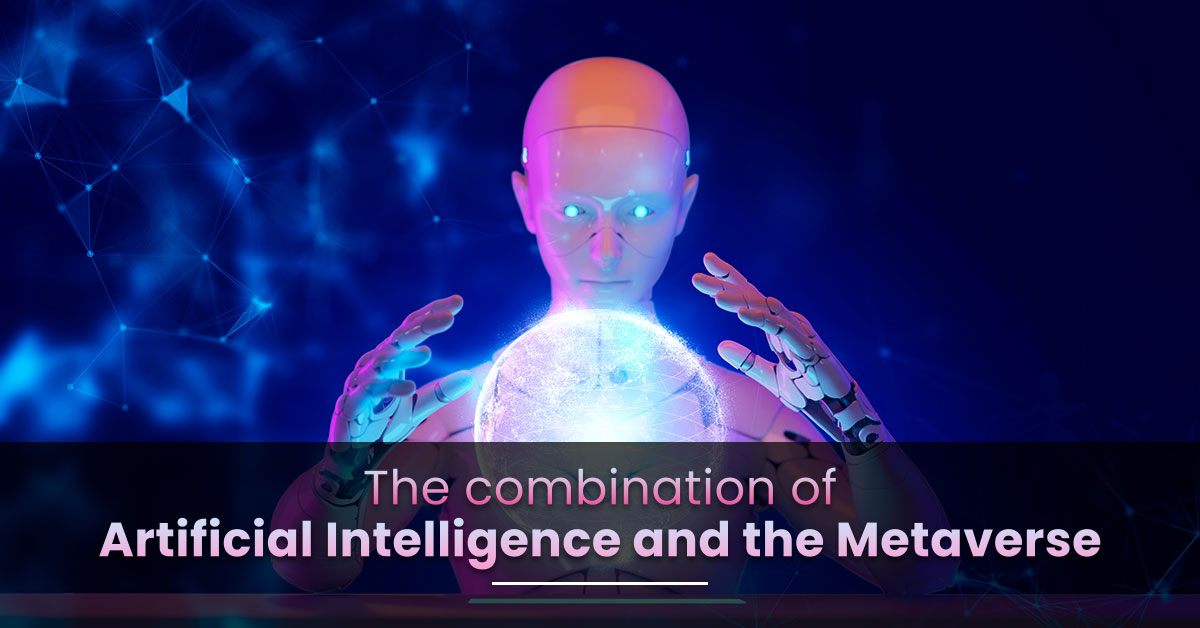 What is The Metaverse and Why Does It Require Artificial Intelligence (AI)?

Though we have discussed Metaverse in-depth in the previous blog, “Everything You Need To Know About Metaverse”, let us define Metaverse in its most basic form.

The term “Metaverse” refers to an expansive virtual space or world in which multiple users can interact, play, and work collaboratively with 3D virtual avatars and digital objects at the same time.

“Metaverse” was originally coined in the early 1990s by science fiction writer Neal Stephenson, and it has since been evolved by companies such as Second Life, Decentraland, Microsoft, and, most recently, Meta.

Metaverse has the potential to open up endless opportunities for all, but it will significantly benefit game designers, who typically deal with computer-controlled animated avatars who frequently interact with other characters mimicking the real world. Assimilating Artificial Intelligence (AI) in Metaverse will open up previously unexplored avenues for creating more complex and engaging games than it has ever been.

AI’s Possible Implications In The Metaverse

While virtual reality worlds can thrive without artificial intelligence, combining the two brings a whole new level of realism. Let's have a look at some of the most discussed potential use cases, which are as follows:

In the metaverse, life-like characters are the 3D counterparts of chatbots. They aren't exact replicas of other people; rather, they are more akin to AI-enabled Non-Playing Characters (NPCs) in a video game who may respond and react to your activities in a virtual reality world. Digital humans are created totally with AI technology and are vital to the metaverse's ecosystem. There are numerous applications, ranging from NPCs in gaming to automated assistants in Virtual reality environments, and firms such as Unreal Engine and Soul Machines started investing in this approach.

Language processing is one of the most common applications of AI in virtual beings. Artificial intelligence can assist in breaking down natural languages such as English, converting it to a machine-readable structure, performing an evaluation, arriving at a conclusion, converting the outcomes back into English, and sending it to the consumer. This entire procedure takes only a microsecond, much like a real discussion. The greatest feature is that, depending on the AI's training, the results might be turned into any language, allowing users from all over the world to enjoy the metaverse.

When an AI engine is fed historical data, it learns from prior results and attempts to generate its own. With new input patterns, human feedback, and device learning reinforcement, AI's output will improve with each iteration.

Eventually, AI will be able to accomplish the task and produce results nearly as well as humans. AI is being trained by companies such as NVIDIA to develop entire virtual worlds. This development will be critical in boosting metaverse scalability, as new worlds can be introduced without the involvement of the people.

Artificial Intelligence (AI) can also help in Human-Computer Interaction (HCI). When you wear a smart, AI-based VR headset, its sensors will be capable of interpreting and forecasting your neuromuscular patterns in order to know exactly how you wish to move within the metaverse.

In virtual reality, AI can assist in recreating a realistic feeling of touch. It can also assist with voice-enabled navigation, allowing you to interact with virtual items without using hand controllers.

At the present, we could only envision a few of the possible scenarios for how we can employ AI in Metaverse for a variety of purposes. There is really no doubt that AI will alter the existence of the Metaverse, but how often that will influence human lives still remains unknown.

If you are looking for metaverse enterprise solutions, feel free to drop us a line. Our experts will get back to you within 24 hours.