Digital Trivergence: The Amalgamation of Blockchain, AI And The IoT

The evolution of the digital age and the novel technological advances in segments like AI, digital identity, IoT, autonomous vehicles, distributed energy, quantum computing, and more has brought a monumental shift in the way businesses operate today. The legacy systems are being modernized in ways that were never imagined before. These groundbreaking technologies are being rebuilt on a blockchain foundation since the prophecy of these emerging digital technologies might never be fully realized without a protected and decentralized blockchain core.

While the first phase of the digital age saw the advent of mainframes, minicomputers, and the internet, we are now entering a second age in which digital technologies pervade everything and every corporate function. We are all aware of how breakthroughs such as NFTs, machine learning, robotics, virtual reality, drones, distributed ledgers, 5G, additive manufacturing, and synthetic biology are altering the social and economic environment. However, when everything is said and accomplished, the convergence of three of these— artificial intelligence, blockchain, and the internet of things (IoT) — will be pivotal.

It's what we call digital trivergence. This three-part interplay of blockchain, AI, and IoT will result in some of the most revolutionary and humongous solutions for a crisis-stricken world. In this blog, we will discuss how these technologies are fuelling a new change in the global economy. 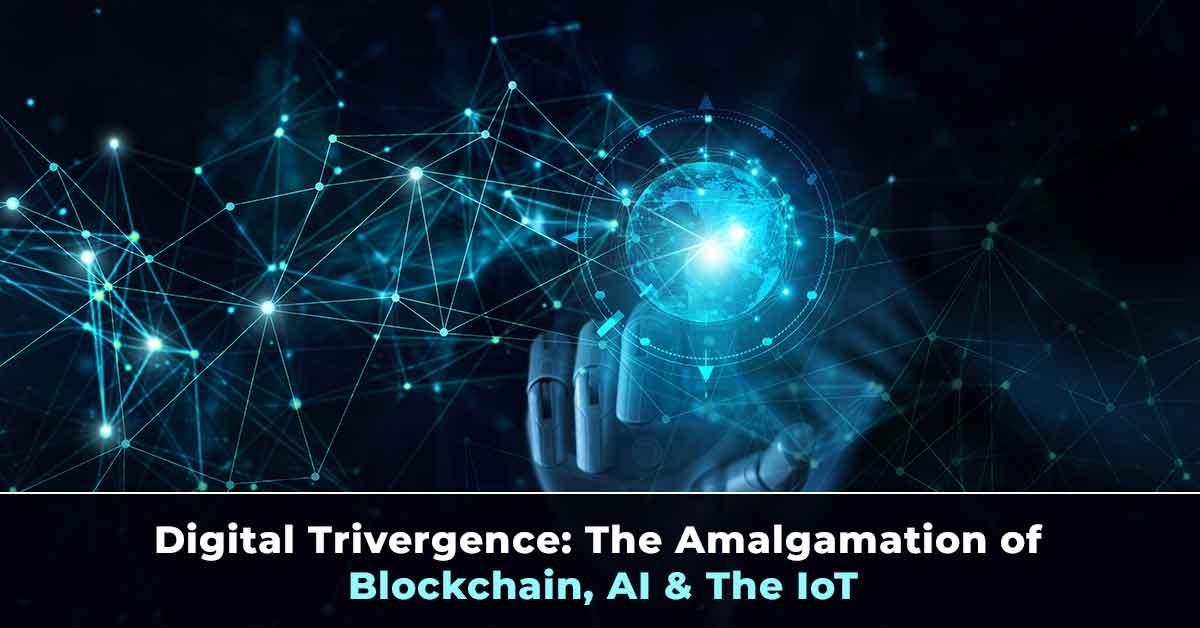 The Internet of Things refers to the increasing connectedness of common objects and the real world to the internet. The advancement of wireless sensors and smart gadgets is providing new opportunities for a seamless computational network that unites every living creature and inanimate object on the earth into a worldwide Internet of Everything. Today's IoT applications range from the ordinary — such as your fridge ordering milk from Amazon —  to the spectacular, such as an internet-connected glucometer that reminds diabetic patients to take their insulin while allowing physicians to check their health in real-time.

Artificial intelligence refers to computers' ability to perform tasks that normally require human intelligence, such as the visual perception requisite to acknowledge complex patterns and the processing capabilities necessary to generate inferences from massive datasets and offer suggestions for individuals to take into account in their decision-making. AI systems have already been relocating beyond high-volume, low-complexity data storage and processing to implement progressively non-routine and complex processes that have typically required the distinct pattern recognition capabilities connected with social cognition, huge kudos to the exponential rate of technological progress. Computers are becoming competent in information-based tasks such as administrative assistance, basic info brokering, simple software coding, and even boilerplate legal work, thanks to incredibly advanced systems for speech recognition, natural language understanding, and classification techniques.

Blockchain is the distributed ledger technology that is at the heart of the decentralization revolution. People can utilize blockchain solutions for far more than just recording safe payment transactions, which is why we term it the internet of value. Money, stocks, proprietary information, deeds and contracts, entertainment, votes, and our personal data may all be stored, managed, and exchanged using distributed ledgers in a secure, private, peer-to-peer system. We build trust without the need for intermediaries such as banks, stock exchanges, or credit card firms, but rather through cryptography, mass participation, and some creative code. In essence, blockchain software combines transaction records into chunks or "blocks" of data, then links and timestamps the blocks to form chains that give an irrevocable record of transactions with limitless levels of secrecy or transparency, as required.

Each of these core technologies is distinct and powerful in its own right. However, each of them is altered only when viewed collectively. This is a perfect example of the whole being bigger than the sum of its parts. IoT will integrate us and our devices. AI will process massive amounts of data and facilitate autonomous decision-making. Blockchain will be the fundamental platform on which data is kept, value is transferred, and everything is dispersed for optimal security and resilience. Overall, a complete end-to-end picture of an interconnected, mechanized, and decentralized future.

The convergence of IoT, blockchain and AI offers us an ever-learning, highly autonomous platform for economic innovation in the next decades. It heralds in the semantic web (Web 3.0), a decentralized network in which billions of IoT devices produce sensor-direct data, a distributed ledger records and secures that data, and AI analyses the data – controlling and refining how it is saved, conveyed, and communicated.

Prepare for changes wrought by Trivergence

Every industry is being affected by trivergence. In the world of finance, the wallet has evolved into a smart app that can receive and learn data.  Users can send, save, lend, invest, and safeguard digital assets peer-to-peer on a blockchain without the need for central intermediaries. In the manufacturing sector, 3D printers are producing aircraft parts in a Boeing facility using a blockchain network that facilitates all patented files, contracting, and peer-to-peer payments. Telecommunications businesses are no longer discussing intricate, complex, and constantly changing roaming agreements, but rather employing blockchain-based smart contracts amongst providers to automate the worldwide web of payments and settlement.

Over the period, the trivergence will herald in the next era of the internet in which nearly every animate and inanimate object on the planet produces data, a distributed ledger archives and secures this data, and AI analyses the data, articulates with the objects, notifies their owners, and consistently adjusts and improves the economy's efficiency and the viability of its environmental effects.

This trivergence is facilitating new business models that are disrupting numerous industries and providing platforms for economic innovation for the coming decades. This second epoch has significant ramifications for every organization, government, and individual, and also for innovation strategy, infrastructure, and leadership. If we can conquer the nasty side — and that is a major "if" — this trivergence will help us restore our digital identities, combat climate change efficiently, and resolve some of the world's most difficult challenges.

Looking for digital trivergence services for your business?

At Oodles Technologies, we offer comprehensive digital trivergence solutions to businesses across a plethora of industries such as real estate, eCommerce, media & entertainment, FinTech, gaming, education, healthcare, and more. As a trusted app & software development company, we enable startups, SMEs, and established brands to overcome complex operational challenges through next-gen technologies such as blockchain, metaverse, NFTs, AI, AR/VR, and edge computing, just to name a few. With a seasoned team of in-house developers, we provide technical and strategic assistance to entrepreneurs and business owners, materializing innovative ideas into tangible success. If you have any questions or are interested in developing a project fuelled by digital trivergence technologies, please drop us a line. We will respond to your inquiry within 24 hours.