As we are thriving in an industrialized ecosystem and its sweeping digital wind, the adoption of FinTech technologies in apps and websites is also expanding extensively.

From early 2010, FinTech started to penetrate the mainstream financial services industry. Blockchain is one of the core technologies in FinTech.

By mid-2021, blockchain was pushing beyond measurements to FinTech and created a league of its own. Various sectors are now applying for vendor partnerships with blockchain firms for improved efficiency and more stable unit economics. The insurance sector, healthcare sector, financial institutions, and identity verification are some early badges of blockchain success.

With every passing day, the global financial system serves billions of people and influences trillions of currency. But, the system is fluffed with flaws, like timeline delays, cost discrepancies, and redundant processes that cause grinding, which ultimately open doors to fraud and depravity. This makes the system sensitive to vulnerability. Here is when Blockchain comes into account.

Oodles Technologies is a prominent app development company that constructs cross-platform business applications based on the distributed ledger tech, i.e., blockchain.  Empower your business security and grants easy interoperability with increased transparency and operational efficiency with us.

Before diving deeper into FinTech, let’s understand what exactly is blockchain? 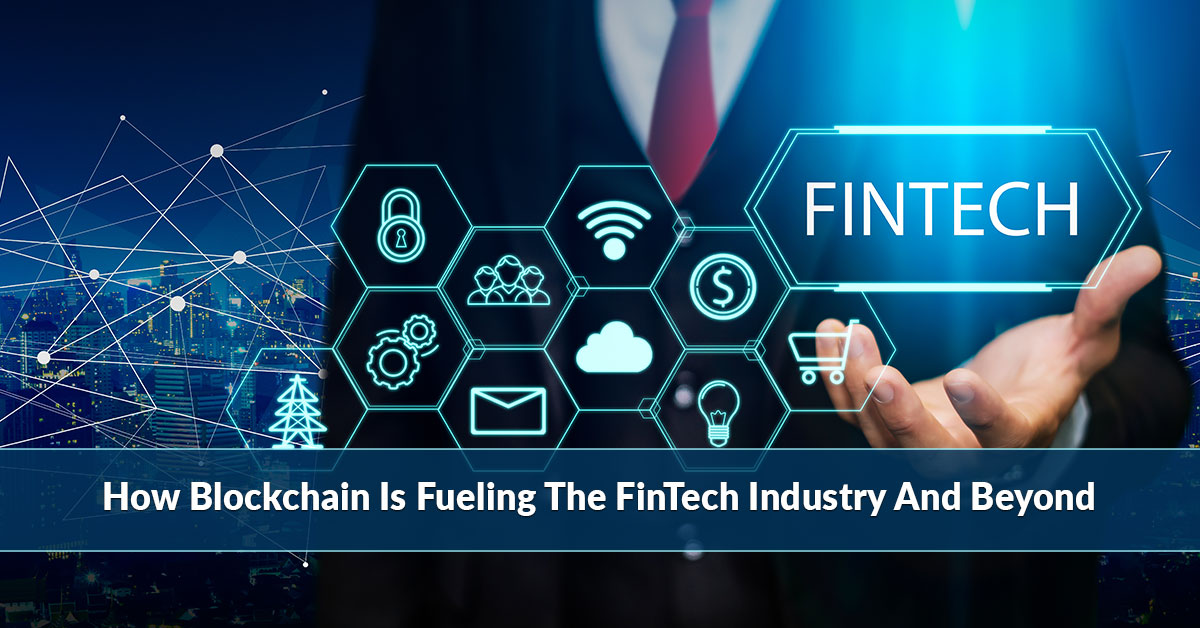 Blockchain is a decentralized arrangement of digitally recorded transactions, which intermediaries can’t manipulate or restrain. Banks, processors, and payment networks work as intermediaries in today’s payment and banking landscape. For instant delivery of funds and settlements, blockchain directly connects two parties without any other party being involved. Blockchain cuts out the middleman involved, giving back the power to the owner of the assets.

We can simply state that blockchain is a collection of transactions that a group of servers manages in chronological order. There is no central authority that can take control of the database. The database can be updated by an accord between participants in the network, and a new transaction can never be erased or tampered with when recorded. Blockchain stores transactional data in the form of a continuously expanding list of records called blocks. These blocks are linked and secured by blockchain using cryptography. Each block usually contains three elements:

The principal features of blockchain can be classified as follows :

Decentralized Finance (DeFi) – A Blockchain-enabled decentralized network operates on a peer-to-peer basis, which means that by storing data across its network, blockchain eradicates the risks that come with centralized data.

Distributed ledger– It allows sharing a log of activities, such as arbitrary data or anything virtually between various parties. Each computer in the distributed network array maintains a copy of the ledger, ensuring transparency and preventing a single point of failure (SPOF). All documents are validated and updated simultaneously.

Non-changeable records– Blockchains are intrinsically resistant to modification of data. All blockchain networks adhere to a specific protocol for validating new blocks. Once recorded, the data cannot be altered without the alteration in all the subsequent blocks, which requires the accord of the majority network.

Now the vital question that arises is how does a transaction get into blockchain?

FinTech is the synergy between finance and technology, a seamless amalgamation of technology in the finance sector to produce swift, effective and accurate solutions for businesses and consumers.

It has enabled the banking industry to become more intelligent and quicker than it was ever.

Blockchain is one of the prominent technologies that contributes to Fintech. Blockchain has helped several companies or businesses to make transactions and develop value without relying on mediators such as banks and other agencies.

How to make people trust the financial industry and create a safe and secure financial product?

The biggest hurdle faced by a Fintech company is trust. Banks and financial institutions have substantial cash reserves to create secure networks on which banking transactions take place. Fintech firms lack funds which restricts them from procuring a high-security system.

Now enters Blockchain in the equation. Blockchain is an economical and highly secure way of storing data. Blockchain is a series of immutable blocks; this allows businesses to track the complete lifecycle of a financial transaction, creating secure and safe financial products and bringing innovation in the financial sector.

As per the Market Research Future report, by 2023, Blockchain will capture and transform the overall business landscape, and the global blockchain fintech market will rise to worth USD 6700.63 million, with a CAGR of 75.2%.

The future of blockchain in finance is becoming more vivid and prominent due to various factors such as:-

Banks can reduce interactions with intermediaries by implementing smart contacts within a platform. They can also minimize contract execution and management costs, lowering the cost of transactions between banks using blockchain.

With blockchain, a transaction can be completed within seconds.

With no middlemen being involved, banks now assure that consumers finish transactions more swiftly. As a result, they will be able to meet and process more transactions within a set period.

Blockchain can store any form of data, and it can only be accessed only by some rules and laws. Smart contracts are a technology that automatically validates and administers contracts. By transferring banking data to shared ledgers, the banks gain access to blockchain benefits like trading, security, and auditing.

A public key is available to all users, but a private key is shared only by the persons involved in a particular transaction. Also, once it gets verified, the data of the transaction can’t be altered.

Banks have also profited from blockchain because it has made it easier for them to mitigate transactions. Now they can track transactions more prominently and detect mistakes swiftly.

This enables them to detect mistakes before the completion of a transaction. Consequently, they’ll be able to detect and correct errors before it even occurs.

There is no agnosticism in stating that blockchain is the backbone technology behind the revolution of the Fintech industry. And as the financial service industry is shifting from the exploration phase to the application phase, financial experts or institutions need to understand the significance of Blockchain in Fintech if they want to take complete leverage of this economic revolution.

Blockchain coordinates security and profit. So, if you are a business or a startup owner, you must start considering a reliable blockchain app development company to help you re-imagine your business pattern and understand how blockchain can help you stay afloat and competitive with your peers. For more information, feel free to connect with our experts.

New NFT Trends That Will Reshape The Entertainment Industry in Future

With NFT integration solutions, the entertainment & digital media industry is now opening its doors to a larger segment of artists, content creators, producers, and viewers.

NFT APIs As A Service: Everything You Need To Know

NFT APIs can be used for tasks like extracting data from different smart contracts and integrating it into DApps that can perform without any additional effort.

How Multichain Blockchain Development is Gaining Dominance in 2022

For Web 3.0 to grow, multichain blockchain development is the only solution that would deliver a frictionless experience and eliminate complex transactions for the users.