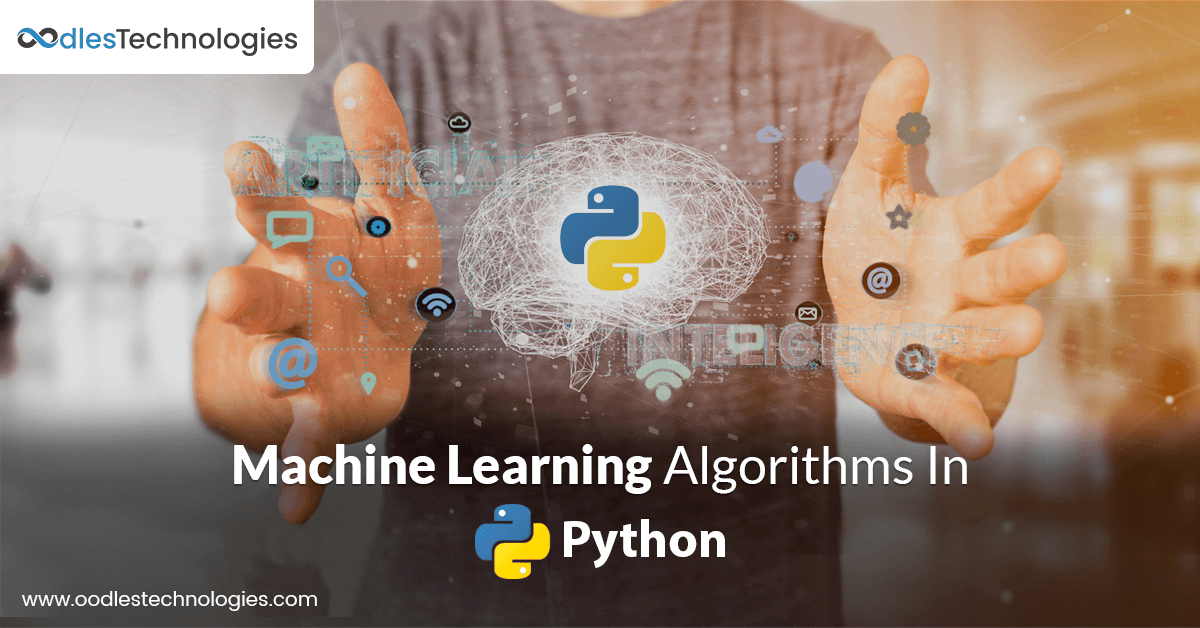 Machine learning algorithms play a critical role in delivering engaging user experiences by accurately analyzing user behavior through historical data. As of today, an increasing number of enterprises rely on ML-based applications to monitor their customer behavior and identify consumer preferences. The machine learning data enables them to formulate effective trade strategies, in-line with the preferences and expectations of their potential customers. That being said, the demand for machine learning app development is rapidly increasing to fulfill the dynamically changing enterprise requirements. Nevertheless, a majority of businesses seek Python app development services for implementing machine learning algorithms.

Below are the most popular machine learning algorithms used in Python.

Also known as univariate linear regression, this technique is used for predicting responses using a single variable or feature. In Python-based single linear programming, we consider a linear relationship between two variables. The algorithm aims at discovering a linear function that provides the most accurate response to the independent linear variable.

Both single and multiple linear regression algorithms are specifically useful in implementing machine learning models that incorporate supervised learning. For example, you can train a computer to automatically filter spam emails based on the latest information. Furthermore, these algorithms are also used in consumer behavior forecasting in Python-based machine learning application development.

It is a supervised learning-based ML-algorithm in Python that aims at identifying discrete values like 0 and 1. In this way, it enables computers or machines to estimate simple functions like Yes/No and True/False. The algorithm uses a given set of independent variables and a logistic function to predict the possibility of an event. The output for every event comes in the binary values, 0 and 1.

This type of algorithm is widely used for the classification of problems based on two outputs i.e yes/no or true/false values. For example, developers can implement this algorithm to identify if the given email is spam or not. Similarly, when fed with the medical history of a patient, this algorithm can be used to predict the possible illness with a fatal disease.

A decision tree is yet another example of supervised machine learning algorithm. It enables computers to solve problems related to both regression and classification. However, it is majorly used for classification and comparison of objects, images, and numerous other entities. When implemented in Python, the algorithm compares the key features associated with the given entity as per a predefined conditional statement. For every instance, it traverses a tree, compares the features, and provides the outcome for an effective decision making.

There are mainly two types of decision trees:

A classification tree is a simple Yes/No type of tree in which the decision variable is categorical.

Also known as Naive Bayes Classifier, it is a classification-based algorithm that works on the assumption of independent predictors. When implemented in Python app development, Naive Bayes algorithm assumes that a variable is independent of the other variables or features. As the name suggests, the algorithm is based on a popular mathematical computation called Bayes Theorem.

For example, the algorithm can accurately predict whether a ball is a football or not based on the given features and characteristics. Similarly, the algorithm can be used for the classification of countless objects or entities with high accuracy.

The algorithm is easy to implement in Python and is effective at handling large and complex data sets.

It is a complex version of the decision tree algorithm which combines several decision trees to perform random sampling of data sets. In random forest, there are multiple trees and each tree is trained with a random subset of data. It makes the algorithm unbiased and more accurate than decision tree algorithm. In addition, random tree is a more stable algorithm as it remains unaffected by the dynamic changes in the given dataset. Nevertheless, the algorithm works perfectly well for both numerical and categorical variables or features.

We are a 360-degree Python app development company that builds cross-platform web and mobile applications using Python-based programming. We use the latest Python development frameworks including Django and Flask for delivering high-performance enterprise app solutions. Our development team is skilled at implementing machine learning algorithms in Python-based application development projects.

Time-tracker software can furnish remarkable benefits for both employees and organizations, leading to better work, increased productivity, and higher profitability.

Web applications are by nature asynchronous and have to communicate to the server. Each request-response pair takes time, so we use visual elements called loaders.