Understanding The Value Chain of The Metaverse

The Metaverse has become the tech world’s latest obsession. Even Facebook, the world's largest social media platform, changed its name to “Meta”, suggesting that the Metaverse is actually aiming to become the next great mainstream technology.

Facebook CEO Mark Zuckerberg said that we have progressed from computers to the Internet to smartphones, from text messages to images to videos, but that's not the end. “The next platform and medium will be a more immersive and concrete Internet. You will be in the experience, not just as a bystander. We call it the meta-universe.”

A creator-driven concept of a future meta-universe predicated on the principles of decentralization. People have been moving steadily on the technical journey from pursuing experience to making it possible by embracing the "magnificent dreamland" of tech on the back roads.

Fortunately, we are on our way to a future controlled by innovators, a more fair future marketplace. In this article, we will discuss the value chain of the Metaverse which is a multi-trillion dollar investment industry, in which private cooperation invest. 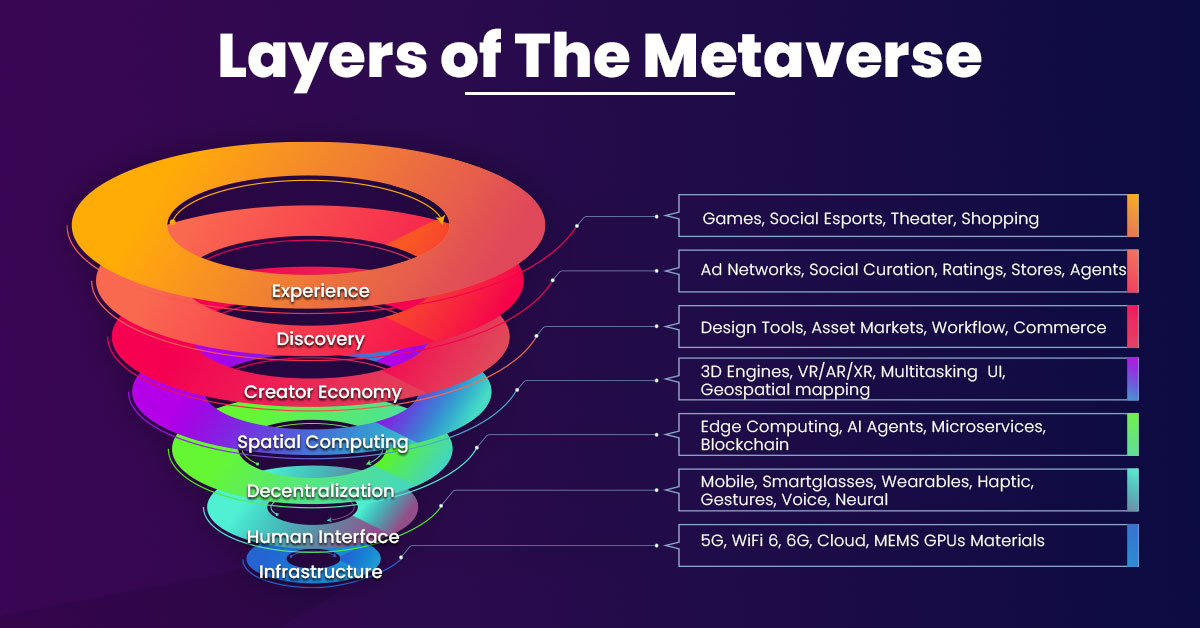 The relentless dematerialization of the physical environment, distance, and objects is the theme of the meta-universe. Alexa in the kitchen, Zoom in our virtual workplaces, Clubhouse on our smartphones, and Peloton in our home gyms are all part of the Metaverse. It includes 3D games for consoles such as Fortnite, Beat Saber for VR headsets, and Roblox on computers.

What happens when physical space is dematerialized? Formerly scarce experiences may become abundant. The more vivid the game, the clearer the path forward: in the game, you can fantasize about being a rock star, a Jedi warrior, a racer, or anything else you can think of.

The game will evolve to include more live entertainment, such as live concerts and immersive theatres, as seen in "Fortress Night," Roblox, and Rec Room.

Social entertainment will strengthen e-sports and virtual communities. Simultaneously, established businesses such as tourism, academia, and live performances will be restructured to revolve around game thinking and a thriving virtual economy.

Customers are no longer just content consumers; they are also content producers and content boosters. There was once a concept known as "user-generated content" when it comes to humdrum services like blog comments or video sharing. Now, content is not just created by people, but it also evolves through their interactions and becomes a part of the essence of the community's discussion. Content creates content, resulting in a virtual flywheel of content, activities, and social engagement.

In the near future, when we talk about "immersion," we will not only mean immersion in a graphic space, but also social immersion and how it fosters engagement and content.

The discovery layer is all about enticing individuals to try fresh experiences. At this moment, a massive ecosystem is one of the most productive ecosystems for many businesses.  Typically discovery systems can be categorized into two kinds: inbound and outbound.

Community-driven content is a cost-effective method to explore other forms of advertising. When people are interested in the content or events in which they participate, they spread this message. The material itself will become a marketing asset as it becomes easier to exchange, barter, and distribute in the context of more meta-spaces.

Also Read: Decoding The Role of NFTs In Metaverse

As a mechanism of discovery, the content market will supplant the application market. NFT is one aspect that has emerged: whether you like it or not, the key benefit is that it can be reasonably readily offered to decentralized trading systems, as well as the economics that promotes more direct engagement between creators and communities.

Some games' walled gardens make extensive use of actual status: if you sign in to Steam, Xbox, Battle.net, or PS, you may see which championships your friends are playing. Clubhouse exemplifies the effectiveness of this structure beyond the game: the option to join which room is based primarily on the curated list of the people users follow.

The metaverse is digitizing social hierarchies in the same way that we are dematerializing physical reality. The "stickiness" of social media encircling numerous comprehensive providers marked the early phases of the Internet, and a decentralized identity ecosystem may shift power to the social circle itself, allowing users to explore frictionlessly in the communal experience move.

The meta-universe experiences not only become increasingly immersive, and social, but the number of creators who create them has increased significantly. This layer contains all of the technology used by producers to create experiences that consumers enjoy on a daily basis.

The previous creator economy progressed in a consistent manner, whether in the metaverse, online development, video gaming or e-commerce.

In the pioneer era, the first people to create experiences for a given technology had no tools available, so they build everything from scratch. The earliest websites were coded specifically in HTML; people implemented their customized shopping carts for e-commerce sites, and game programmers wrote straight to graphics hardware.

In the engineering era, following the early success of the creative market, the number of people exploded. Building from the ground up is frequently too long and expensive to suit the objectives, and the workflow gets more convoluted. The first tools on the market tend to alleviate the strain of overburdened engineers by giving SDK and middleware to save engineers' time.

In the creative era, creators and designers don't want coding bottlenecks to decelerate their speed, but developers are much more interested in contributing their skills to the project's distinctive qualities. This epoch is defined by the rapid and exponential development in the number of creators. Creators now have access to equipment, templates, and content channels, relocating development from a base, code-centric approach to a top-down, artistic process. You can now launch an e-commerce website in Shopify in moments without knowing a single line of code. Wix or Squarespace can be used to design and manage websites.

The meta-universe experience will grow more vibrant, social, and continually updated. So far, the Metaverse creator-driven experience has centered around centralized management platforms like Roblox, Rec Room, and Manticore.

Space computation promotes blended real/virtual computing, breaking the boundary between the actual and ideal worlds. Whenever feasible, enable the space in the machine and machine in the space to permeate each other. This sometimes entails bringing space into the computer, and other times it entails infusing calculations into entities. Most of the time, this means that the system's layout can break through conventional screens and keyboard bounds without being caught and integrating into the interface or soft simulation.

Spatial computing has evolved into a broad category of technologies that enable us to enter and alter three-dimensional space, as well as employ more knowledge and experience to enrich the real world.

Split the layers of spatial computing software and accompanying hardware. It mostly contains the following major components of the software:

The Domain Name System (DNS) is the most basic form of decentralization; it links a single IP address to a name so that you don't have to provide a number every time for going online.

Distributed computing and microservices offer developers a scalable environment for leveraging online capabilities ranging from commercial systems to specialized artificial intelligence to diverse game systems without the need to concentrate on constructing or integrating back-end capabilities.

Blockchain technology emancipated capital assets from centralized ownership, ushering in the concept of Decentralised Finance (DeFi).  With the introduction of NFT and blockchain, as well as optimization for the type of micro-transactions required for gaming and metaspace experiences, we will see a wave of innovations in decentralized platforms and applications centered on game assets.

Simultaneously, "far edge computing" carries the cloud nearer to our "home" in order to develop efficient apps with low latency without putting all of the workloads on our devices. Computational power will become more like resources on the grid, rather than data centers.

Computer equipment is now growing closer to humans, transforming people into cyborgs.  Smartphones are no longer be considered mobile phones. They are indeed very portable, invariable, powerful mini computers that also happen to come with a phone application pre-installed. They will grow in power as downsizing, proper sensors, incorporated Artificial intelligence, and low-latency access to powerful edge computer systems allow them to consume ever more apps and experiences from the meta-universe.

Oculus Quest is basically a smartphone that has been co-integrated into a VR gadget; this release provides insight into the company's future development plans.

Within a few years, Quest 2 will be reminiscent of portable brick phones from decades ago; shortly, we will have smart eyeglasses that can handle all of the operations of a smartphone or tablet as well as AR and VR applications.

Aside from smart glasses, even more, industries are looking for innovative ways to bring us closer to machines, such as incorporating 3D printed wearable devices into fashion apparel; inserting micro-biosensors or even printing them on the body, and even accessing the customer neural interface.

The infrastructure layer is responsible for operating our gadgets, connecting them to the Internet, and delivering content technologies.

5G networks will significantly enhance bandwidth while decreasing network occupancy and latency. 6G will boost the speed by an order of magnitude.

Acknowledging the unrestricted functions, superior efficiency, and miniaturization needed by next-generation smartphones, smartwatches, and wearable technology will necessitate immensely influential and smaller hardware: semiconductors with processes that are about to be whittled down to 3 nanometers and above; small The sensor's micro-electromechanical system (MEMS); and a compressed, long-lasting power bank.

It is unclear if virtual reality is "a" virtual reality, whether the future generation of the Internet is a multiverse, or whether this space-rich experience will surround us socially and visually. What can be ascertained is that a powerful invention exists. Decentralization will enable the realization of the meta-universe driven by people's economy.

All in all, Metaverse has undoubtedly disrupted the physical world and has become one of the most groundbreaking digital innovations in the current era. What are your thoughts on metaverse implementation in diverse business sectors? If you want to discuss project ideas or looking to leverage metaverse services for your vertical, feel free to drop us a line. Our experts will get back to you within 24 hours.