Smart Glasses in The Metaverse

The metaverse is a virtual realm that is subjected to interoperability and accessibility. Essentially, it points to the evolution of the internet, i.e. Web 3.0, a hyper-realistic digital world that closely replicates our own physical world. Moreover, it is augmented by being persistent and three-dimensional, offering immersive experiences across a range of metaverse devices, wearables, and applications.

As the conventional belief holds, the metaverse is much more than just powering gaming projects. In fact, situations have changed significantly in the existing times. The future metaverses are designed to offer infinite possibilities and practical benefits to businesses far beyond the world of gaming.

This altogether begs a pivotal question: how can we access the metaverse? The answer is with metaverse gadgets such as AR smart glasses and VR headsets. However, in this blog, we will only focus on the transformative aspects of smartglasses and how are they enabling the construction of a gargantuan metaverse. Let’s begin. 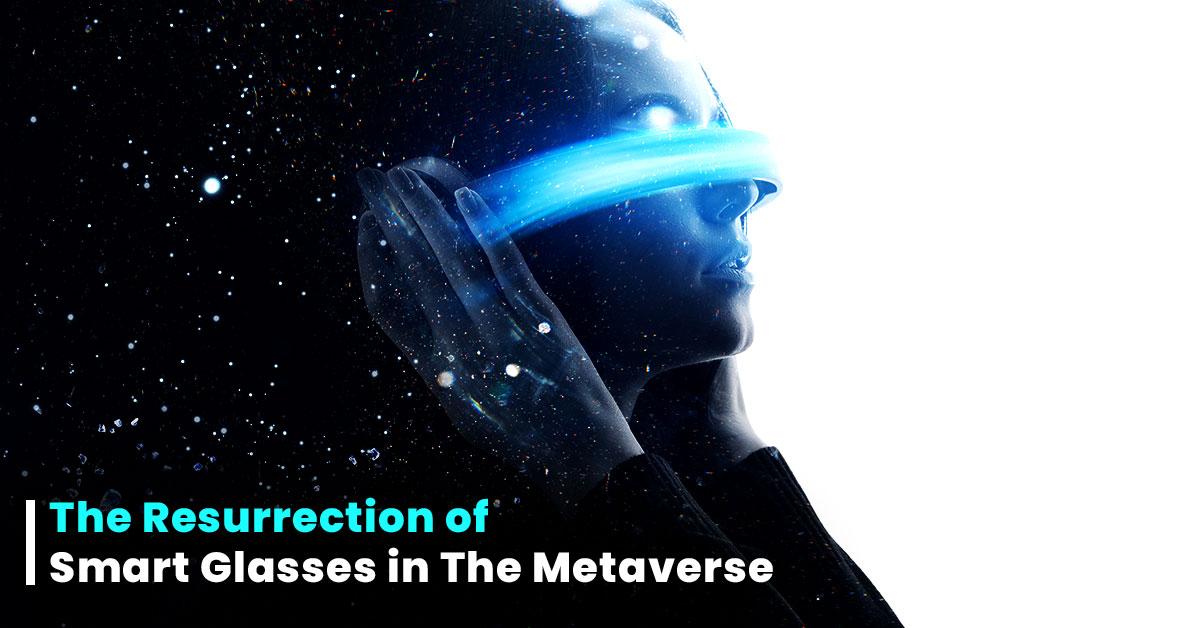 A Quick Walk Back Into The Time

When Google first showcased its smart glasses - ‘Google Glass’ - in 2013, it rightfully felt like a gizmo straight from a sci-fi movie. It was an optical head-mounted display constructed in the form of a pair of glasses. Initially, Google advertised it in terms of experience augmentation. Rather than Augmented Reality (AR), the Google Glass, however, only supplemented it.

The device enabled users to view photos, check messages, and browse the internet. However, if a hefty price tag, poor battery performance, and limited features paired with security issues, the device did not catch mainstream users’ attention as they preferred to stick to their high-end smartphones.

As a result, two years later, Google gave the concept a second shot by launching the Google Glass Enterprise Edition. It was used in manufacturing settings to help make the jobs seamless and safer. These devices clip into safety goggles or glasses, enabling faster job completion by furnishing critical information without any distraction. Largely after that, smart glasses were put to rest.

The Existing Scenarios of Smart Glasses

Cut to the present day, with constant innovations in the metaverse, smart glasses seem to have resurrected. We can see new smart glasses being launched by major tech players around the world citing them to replace smartphones in the near future. They are also touted as gateways to the metaverse.

While only a little was heard from Google in this regard, other companies also started to chime in. For instance, Snap Inc launched three generations of smart glasses under its Spectacles portfolio while Bose also introduced their Frames. More recently Meta (formerly Facebook) launched Ray-Ban Stories in collaboration with Ray-Ban at an affordable starting price of $299. Additionally, Xiaomi has also revealed their Xiaomi Smart Glasses which use technology like the optical waveguide to display information on one of the lenses.

Out of a multitude of use cases of smart glasses in the metaverse, we believe that they will significantly give a boost to augmented reality technology. We have mentioned some of the core fields where smart glasses will carve a way for metaverse participants, users, and businesses.

Digital assistants with a visual on-screen appearance and exhibiting social traits will make the entire experience more trustworthy and compelling. It would be a remarkable feeling to have a proactive bot show up on your smart glasses screen, notifying you of actions that need our immediate attention.

AR-based ads can spring up basically by scanning a QR code or marker embedded anywhere. With smart glasses, users don’t have to pull up their phones to view or experience the ads.

Metaverse smart glasses also allow users to respond with a voice command and also see the projected experience. Even for advertisements on streaming platforms, a subtle ad with a simple marker could display on the screen, leaving it up to the user whether they wish to invoke the AR-based promotion.

Imagine you are shopping at a supermarket and you pick up a product off the shelf. Inside the metaverse, smart glasses can relay pertinent information about any item in 3D. In case if you can not find a product that you want, you can command your smart glasses and it would navigate you to the desired location in an intuitive, engaging, and gamified way.

In the manufacturing sector, metaverse smart glasses can aid in making swift decisions by projecting critical information and data on the field. It can also help in enhancing safety, enabling users to troubleshoot issues in real-time with the capabilities of video conferencing and streamline mundane tasks.

Leveraging the potential of AI, metaverse smart glasses can project 3D trainers in front of users’ eyes who could count their repetitions, demonstrate accurate positions and techniques as well as challenge and motivate users throughout the workout.

As we all know that the internet is transforming monumentally, it is being largely taken over by new and intuitive metaverse experiences. In fact, the 2D search-based internet is gradually being replaced by more advanced, futuristic, 3D immersive spaces that mirror the real world in the metaverse.

In reference to this, smart glasses have emerged as a key gadget that will aid in bringing metaverse experiences to people. While the existing smart glasses do not have their full potential, the future will undoubtedly witness the inception of more advanced, futuristic, feature-rich, and intelligent smart glasses, enabling users to access the expansive metaverse at the comfort of their will.

At Oodles Technologies, we build next-gen applications and virtual reality platforms for a myriad of businesses and industries. As a metaverse development company, we have established ourselves as an early adopter of revolutionary technologies, enabling global companies to step into the future metaverses with ease and in-depth guidance. If you are looking for metaverse app development or wearable app development services, feel free to drop us a line. Our experts will get back to you within 24 hours.

Utility NFTs marry both exchanges as well as experiential value by efficaciously combining collectibles with utility.

A Solana NFT marketplace enables users to keep and trade digital items as NFTs whilst also generating additional revenue in a secure setting.

How Is FinTech Steadily Adapting To The Metaverse

As the metaverse development services expand and the digital experiences become more like the â€˜real worldâ€™, FinTechs will indubitably be involved.