The Emergence of VOD and Linear Streaming Trends in OTT Landscape

The Emergence of VOD and Linear Streaming Trends in OTT Landscape

VOD or Video-on-Demand refers to the capability to access digital content and media anytime and anywhere. If you are aware of the OTT channels such as Netflix, Hulu, Disney+, and more, you’re probably familiar with VOD or the ability to navigate through a media library and press play to start watching. Hence, known as “Video-on-Demand”. The two primary types of VOD are SVOD or subscription-based VOD and AVOD or ad-supported VOD.

On the other hand, linear streaming denotes streaming programs that air 24x7 where the viewers can not control what they watch. It is very similar to traditional TV since shows are aired during pre-decided time slots. However, the difference is linear streams are administered over the internet via an OTT service instead of a cable provider. They can in time blocks or 24 hours a day and 7 days a week, such as 2:00 PM- 12:00 AM. A remarkable example of a linear streaming channel is Pluto TV with multiple streams running 24x7 simultaneously.

When it comes to OTT, usually the VOD model crosses our minds. In fact, being able to select what to watch and when to watch has always been the prime reason why customers adore it. But more recently, amid the COVID-19 pandemic, linear streaming has started to make a comeback. 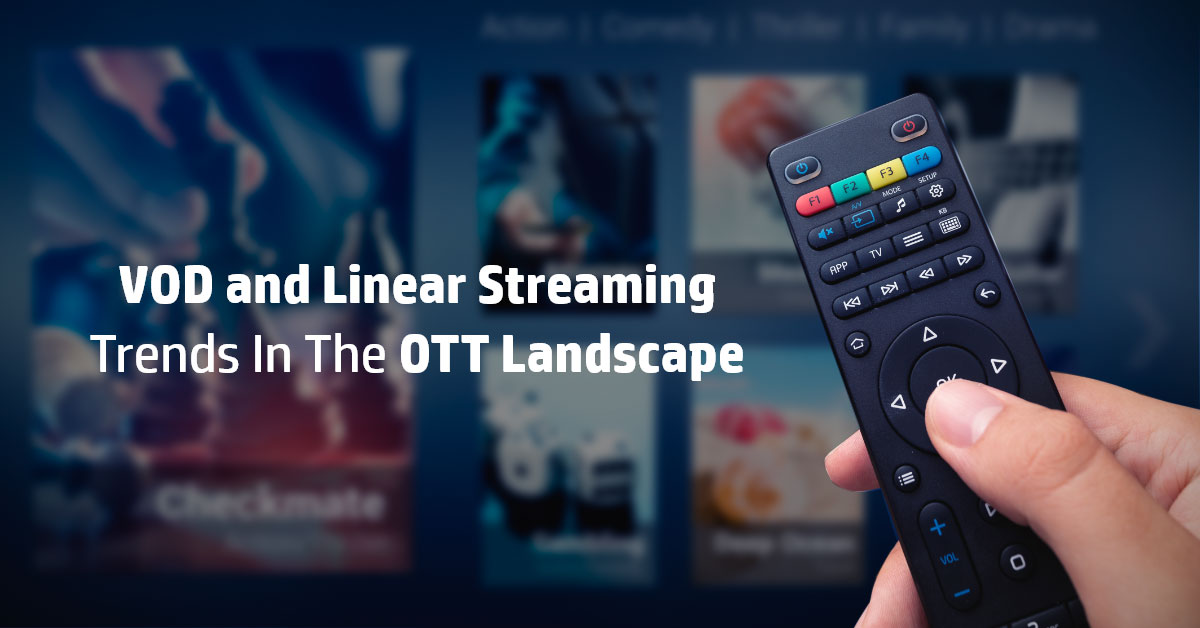 The Rise of OTT

OTT was first rolled out in 2007 when Netflix launched its media streaming debut, and shortly after, Hulu and other platforms followed the suit. The industry snowballed at an unprecedented rate and today, there are thousands of services in the marketplace- each bringing something innovative and intuitive to the table.

Solving The Challenges With VOD

As a lot of viewers faced the problems of missing broadcasted shows due to lack of time and availability, VOD stepped in to curb the issues associated with programs being aired during designated times. It gave viewers the opportunity to catch up on their favorite and missed shows, and went by the name of “catch-up TV”.

Linear Free-Ad Supported Streaming TV or FASTs are channels that are completely free for viewers and are delivered with dynamically inserted ads. One of the most sought-after FASTs, Pluto TV reported approximately 43 million monthly active users in Q4, 2020, and its advertising revenue more than doubled in Q4. Other famous FASTs include The Roku Channel, Samsung TV+, IMDbTV, Peacock, Tubi, Xumo, and more.

As the total number of cord-cutters continues to grow, it is predicted that spending on subscription services will eclipse traditional pay-TV by 2024.

Also Read: Building A Live Streaming App For Android & iOS
The Growing Demand and Its Solutions

In just a decade, OTT global revenue spiked from $6.1 billion in 2010 to $99.69 billion in 2020 and is foreseen to reach $167.4 billion by 2025. Media services agencies are finally accepting the shrinking future of cable TV and are opening new routes for video streaming solutions. Some of the examples for big media companies who rightfully adapted to the rising demands for accessibility and convenience of streaming content:

With the ever-increasing rise in on-demand video streaming app development services, OTT technology is here to stay. The number of users viewing OTT content on a year-on-year basis is surging and will soon overshadow the declining number of customers viewing traditional pay-TV.

Furthermore, linear live streaming has also now become more accessible than ever. At the same time, it is now more competitive to start your own live linear channel, therefore, ensuring the right quality of your digital media content is vital or your viewers won’t stick around.

At Oodles Technologies, we have already witnessed major consumer trends shift and evolve in a short span of time and so it is extremely crucial that enterprises and content creators should be geared up to pivot swiftly as the requirements arise. Partnering with trusted OTT platform development and video streaming app development service providers early on could viably assist media companies seeking to succeed in the highly competitive OTT industry. For more information, speak to our experts.

Smart TV App Development: How Can It Benefit Your Streaming Business

As live events and real-time video streaming continue to progress to OTT platforms, delivering interactive digital experiences to viewers is the next goal is viewer engagement.