With the acquisition of VR headset maker Oculus in 2014, Meta, formerly known as Facebook, took the first step towards the construction of a hyper-real alternative world. Their next direction was the introduction of first-generation smartglasses furnished with the capabilities of mega-brand- Ray-Ban. With that, we would like to shed some light on Ray-Ban Stories, an intuitive and feature-rich smart glass that enables access to the borderless metaverse. In this blog, we will discuss the attributes and possibilities of Ray-Ban Stories and the opportunities it extends to metaverse development services. 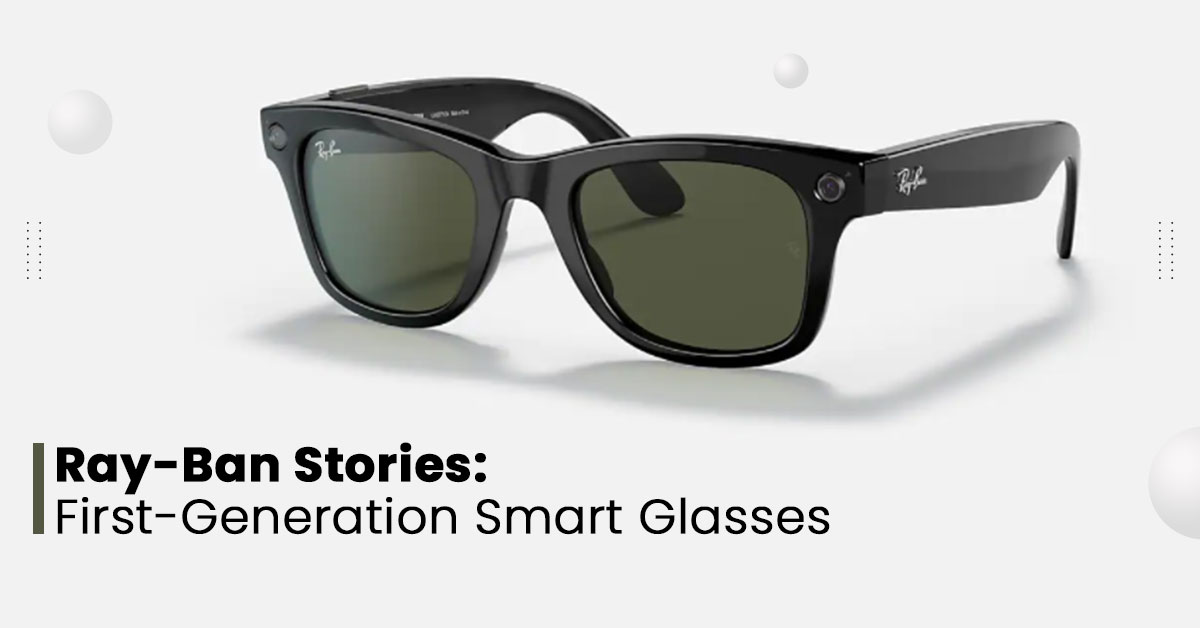 Created in partnership with Meta and the parent company of Ray-Ban, that is, EssilorLuxottica, Ray-Ban Stories are built using existing three Ray-Ban styles and are available as both sunglasses and prescription glasses. With price ranges ranging from $299, they are available in countries such as the US, UK, Italy, Canada, Ireland, and Australia on Ray-Ban’s official website and in-stores.

Meta’s first-generation smart glasses capitalize on the iconic Wayfarer design associated with the classic eyewear brand and come in three designs, Meteor, Wayfarer, and Round.

At first, they might look like ordinary sunglasses, however, they are meticulously equipped with two 5MP cameras at the corners integrated with an LED light near them. The white LED light turns on at the times when you are recording and enables others to know that you are capturing them.

As of now, you can take photos or record 30-second videos by using either the capture button or via Facebook Assistant voice commands. These neoteric metaverse smartglasses leverage “beamforming technology” along with a “background noise suppression algorithm” in order to ensure a seamless and high-quality calling experience, just like you get on the headphones.

Ray-Ban Stories: How Does It Work?

With Ray-Ban Stories, users have to pair and link these smart glasses with Facebook View app. Since they also support Facebook Assistant, users can give voice commands to perform a task. These glasses can be paired with iOS and Android devices.

Ray-Ban Stories also comes with a button to power it off and has a dedicated charging case and can be fully charged with the help of a USB cable.

According to Meta, Ray-Ban Stories can capture and sync up to 200 photos or 50 videos per full charge. Fully charged smartglasses will have a battery life of six hours for moderate usage and up to three hours with Facebook Assistant turned on and with continuous audio streaming.

What About Augmented Reality on Ray-Ban Stories?

While Google glasses attempted to incorporate Augmented Reality in the past, woefully Ray-Ban Stories does not support AR. Had it been implemented, AR would have enabled these glasses to showcase digital content on the optics, thereby providing an ultimate immersive experience.

Surprisingly, Snapchat had also displayed its AR glasses in the previous months, however, they are limited to just their developers and are currently not being sold to the general public. These smart glasses will enable users to experience AR filters in their real-life surroundings and even play immersive AR games.

While Meta’s plans also focus on building AR glasses, it is currently working on the minutes of the technology just so as to bring unparalleled user experiences.

Like Snapchat’s Spectacles, the first version of Ray-Ban Stories is technically referred to as smart glasses and specifically not AR glasses since it inculcates computer functionalities but does not overlay digital content on anyone’s point of view. The glasses are developed by Facebook Reality Labs, whose ultimate goal is to construct tools and technologies that will enable users to feel connected anywhere and anytime. While creating a sense of social presence, it allows people to feel as if they are right there with another person and sharing the same environment or space regardless of physical distance between them.

If you are looking for metaverse wearable app development services, you are in the right digital space. At Oodles Technologies, we provide feature-rich and robust metaverse development services for wearable devices and gadgets that empower the next generation of digital innovations and offer immersive experiences to the users. To request a free quote, get in touch with our experts. We will get back to you within 24 hours.

A Detailed Guide To Metaverse Tourism and Hospitality

The benefits and opportunities that the metaverse solutions furnish to the travel and hospitality sector are truly remarkable..

WebAR: Top Trends and Opportunities To Look Out For

WebAR makes use of sensors on smartphones to enable the tracking and placement of digital objects or materials inside the physical world.