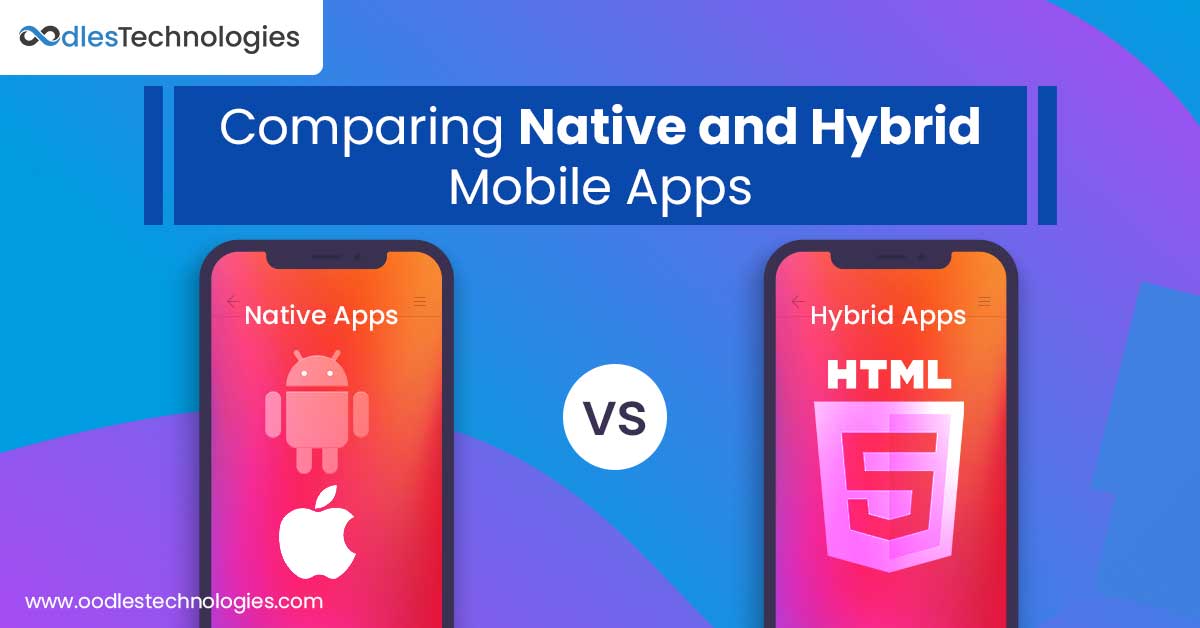 Mobile applications are becoming one of the most dynamic business tools that also strengthen the marketing efforts of various enterprises. Availing mobile app development services enable organizations to enhance their market outreach and provide up-to-date information to their customers.

Developing a mobile application begins with the precise decision of choosing between Native and Hybrid App models. Choosing the ideal application architecture depends largely on the organization’s goals and objectives. For instance, if you wish to develop a heavy-duty mobile application that offers high-speed and improved performance, native apps are more suitable. Contrarily, if you are concerned about developing a lightweight app with high-speed and easy accessibility across devices, hybrid app is the way to go.

In this blog post, we’ll delve deeper into a detailed study of the features, advantages, and disadvantages of Native and Hybrid Apps. Subsequently, you can choose the best-suited approach for your business.

Native Apps are the software applications developed to perform some specific tasks on a dedicated platform like Android or iOS. They are built using programming languages that are only supported on a certain platform.

Native apps are mostly compiled into machine code. It lets them perform best on mobile devices.

Some of its major features include:

Native mobile apps directly interact with native APIs. They do not depend on plugins and WebViews. Because there are fewer dependencies, they run faster as compared to Hybrid apps. It makes them suitable for building performance-centric applications like games and other heavy-graphic apps.

Native applications are highly secure and reliable. It makes them best suited for handling sensitive data.

These apps are developed with native software development kits (SDKs). It means there are no discrepancies between the OS and the app design. As a result, their UIs look consistent with the native platform, thus ensuring a better user experience.

Native apps can directly interact with native APIs. Therefore, they have immediate access to the latest features and updates in iOS or Android.

Building a Native app is complex. Further, it results in distributing its users across multiple platforms. It doubles up the time, efforts, and resources put in to maintain two separate applications for iOS and Android.

Hybrid applications are developed to perform in the same manner across multiple platforms. Their development process mostly relies on cross-platform functionality. Developers use various technologies like HTML, CSS, and JavaScript frameworks packed in a native container to build hybrid apps.

Some of its major features include:

This is one of the biggest advantages of hybrid mobile app development services. There is no need to write and compile separate codes for iOS and Android. Therefore, it is preferred by companies and developers as it enables them to build a single codebase that works on both platforms.

Simpler to Build and Test

As the developers don’t have to deal with each platform separately, it gets easier for them to attain the expected results much faster. The code is created once, reducing a lot of building time. Further, it also results in reducing the testing time.

All the new features and updates are maintained simultaneously on both platforms. It is easier to solve most of the issues from the server end. Besides, users can avail the new updates automatically. It makes hybrid apps convenient for both developers and the end-users.

Developing a single application that runs on multiple platforms implies addressing a vast range of customers with fewer resources deployed. With native apps, it requires hiring two different teams of developers at times. The issue is effectively addressed by hybrid apps that only require one team with good expertise in web development.

As hybrid apps are developed on a single codebase by a single team of professionals, it reduces a lot of disarray. Consequently, the building and maintaining of these apps is much easier, efficient, and cost-effective.

Hybrid apps are dependent on Native plugins to connect with the device features. These plugins can become outdated and unreliable. Moreover, at times the developers need to create plugins manually in order to access certain functionalities of the device.

As we have seen, both Native and Hybrid Mobile apps have their own pros and cons. The core difference between the two is the approaches undertaken for their implementation. Native App development requires the building of different software designs for separate platforms. However, in Hybrid app development, the same software works on multiple platforms.

Each approach has benefits that would be essential for certain projects. Besides, choosing a technology also depends on the organization’s development capabilities. Hence, to choose one of the aforementioned approaches, it is essential to set the exact goals, requirements, and capabilities of the project.

If custom features, good design, performance, and reliability is the key requirement of your project, then Native app is the right choice. However, If you have a tight budget, and need to develop a simple and content-oriented application that runs on multiple platforms in limited time, Hybrid apps might be the apt choice for you.

We are a seasoned SaaS app development company that specializes in providing comprehensive native and Hybrid Mobile App Development Company. Our development team is skilled at using advanced application architecture, strategy, and optimization tools to meet the requirements of our clients.

She is very dedicated to her works and is truly a passionate writer. She is also a very hard worker and always aims at learning something new.

DTO to Entity and Entity to DTO Conversion.

DTO to Entity and Entity to DTO Conversion.

Spring Security along with OAuth2.0

Introduction about authentication in spring boot through OAuth 2.0

How to use ioHook in electron application

It is Node.js global native keyboard and mouse listener which is used to capture the mouse and keyboard clicks.