Wearable Technology And The Metaverse

The metaverse has been an extremely hot topic of conversation in recent times, with giants such as Microsoft and Facebook staking major claims. Core aspects of the metaverse have already been implemented in digital world platforms like Second Life. It is needless to say that some iterations of the metaverse development services involve integration between physical and virtual spaces as well as economies of the metaverse.

This is where metaverse hardware, gadgets, and wearables come into play. Without wearable technology that bridges the gap between physical and virtual realms, the metaverse will literally be nothing more than a pipedream. The entire notion of the metaverse inculcates experiencing realism virtually and engaging with immersive digital environments that are hyper-real and foster limitless networking, communication, and collaboration.

While we will still be able to access the dimensions of the metaverse through our laptops and phones, however, these will soon become just legacy devices. To immerse ourselves, groundbreaking technologies and devices are required such as augmented reality gadgets and virtual reality headsets so as to offer true integration between the digital and physical worlds.

In this blog, we will shed some light on how wearable technology, devices, hardware, and gadgets will shape the future of an immersive metaverse. 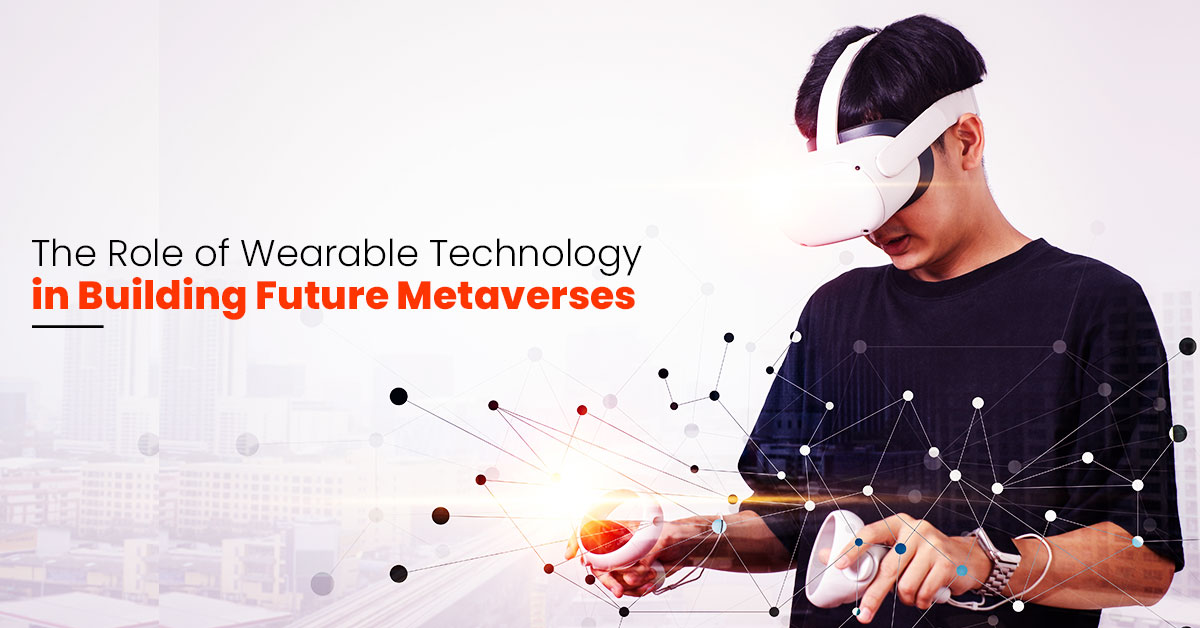 In a certain way, the metaverse is already here and is steadily taking a concrete shape. The route of hardware development that offers access to its full realization is steadily being navigated. As the next-generation AR glasses and VR headsets have already started to replace our laptops and phone, the future of metaverse seems like a near certainty.

The tech industries are briskly embracing a shared world through the expansive metaverse. In order to put an extra bit of lore around this idea, consider a virtual world constructed via complex algorithms, billions of lines of codes, and other techniques leveraging machine learning.

This implies that you can control and create your 3D avatar that exists inside a digitized space. You can move your hand to see your virtual avatar move in real-time as well. Also, let’s not forget the 360-degrees views that you can see of an entirely different world within your convenient spaces like your bedroom.

In the wake of it, companies now have jumped on the bandwagon to see who can develop the most robust, fastest, and feature-rich meta peripherals to get their hands on the initial segments of the consumers. On this note, it is remarkable to see how far this race has come with futuristic gadgets, VR headsets, smart glasses, and AR devices already doing their rounds in the market.

Some of the Prominent Metaverse Gadgets and Wearable Devices

In the advancement of metaverse development, VR headsets have proven to be the biggest role player. While the previous iterations were full of wires and bulky, the new-age designs of VR headsets gave become more seamless and accessible. One of the most sought-after gadgets is Oculus Quest 2, which is making quite some news after being bought by Meta.

Now, companies are heavily investing in building wireless and sleek headsets to magnify their popularity. For gaming and social networking, VR headsets enable players to relish immersive experiences in the metaverse, aided by high-end 3D sounds and graphics.

The metaverse is a truly engaging social space and In With Corporation appears to have laid the groundwork for realizing what we honestly expect. The company introduced the first-ever soft-electronic lens in the world and sets to achieve a Black Mirror-like experience with these AR lenses. It reveals various types of information via electronic circuits that are embedded into the hydrogel body.

Similar to advanced Bluetooth devices, these lenses will send info directly to users about the surrounding world through smartphones or some other compatible devices.

Meta recently announced that they are working with many companies to build high-tech haptic gloves that enable users to feel physical sensations inside the metaverse. For instance, a user petting a digital animal in the metaverse will be able to feel it as he brushes his hands in opposition to it.

The aim is to build lightweight haptic gloves that address both the sides of AR and VR concerns. In this case, it assists the computer to understand as well as reflects the user’s hand movements and gestures while truly mimicking the actual feeling and sensation of the object. While is analysis is continually ongoing, we are thrilled to witness the results and the influence it will have on the metaverse.

The Wearable Skins of the Metaverse

Akin to the haptic, developments are being made in creating wearables like pores and skins. Also known as Reskin, it will have magnetic particles inside it that will produce a magnetic field around an area.

At Meta, the deformable plastic pores and skins are being collectively constructed which are under 3mm of thickness. When these pores and skins come in contact with another surface, the magnetic area from the embedded particles is created. The sensors inform the change in magnetic flux along with the help of AI programs, which notifies that some pressure or contact has been made.

It is predicted that Reskin might be implemented into objects such as prostheses, robotic fingers, haptic gloves, or other metaverse wearable devices that help you feel the metaverse. Nevertheless, Reskin will also furnish high-frequency three-axis tactile sensors or indicators for performing quick manipulation duties such as throwing, catching, and clapping.

In the metaverse, the introduction of scanning and tracking sensors is basically the next big leap in the realm of true immersiveness.

These wearables would help control the rest of the body movements and would allow seamless interactions and communication in the most graphically appealing virtual environments or games.

The endgame of virtual realms is to exist flawlessly alongside the real, furnishing immersive interactions between the two and altogether altering the perception of physical presence. While the software has already taken a solid shape, a myriad of metaverse hardware and wearable innovations are still in the pipeline and will take some time to develop and fully realize the initial concept. The long-term goal is to create light, feature-rich, and comfortable metaverse wearables that can be seamlessly worn all day, switching between augmented and virtual Reality whilst enabling engaging and immersive interactions between metaverse users.

If you are looking for metaverse development services or seeking to integrate wearable technologies into your metaverse hardware, feel free to speak to our experts. You can drop us a line and we will get back to you within 24 hours.

A Detailed Guide To Metaverse Tourism and Hospitality

The benefits and opportunities that the metaverse solutions furnish to the travel and hospitality sector are truly remarkable..

WebAR: Top Trends and Opportunities To Look Out For

WebAR makes use of sensors on smartphones to enable the tracking and placement of digital objects or materials inside the physical world.