New Features and Enhancements In Flutter 1.9 With Dart 2.5 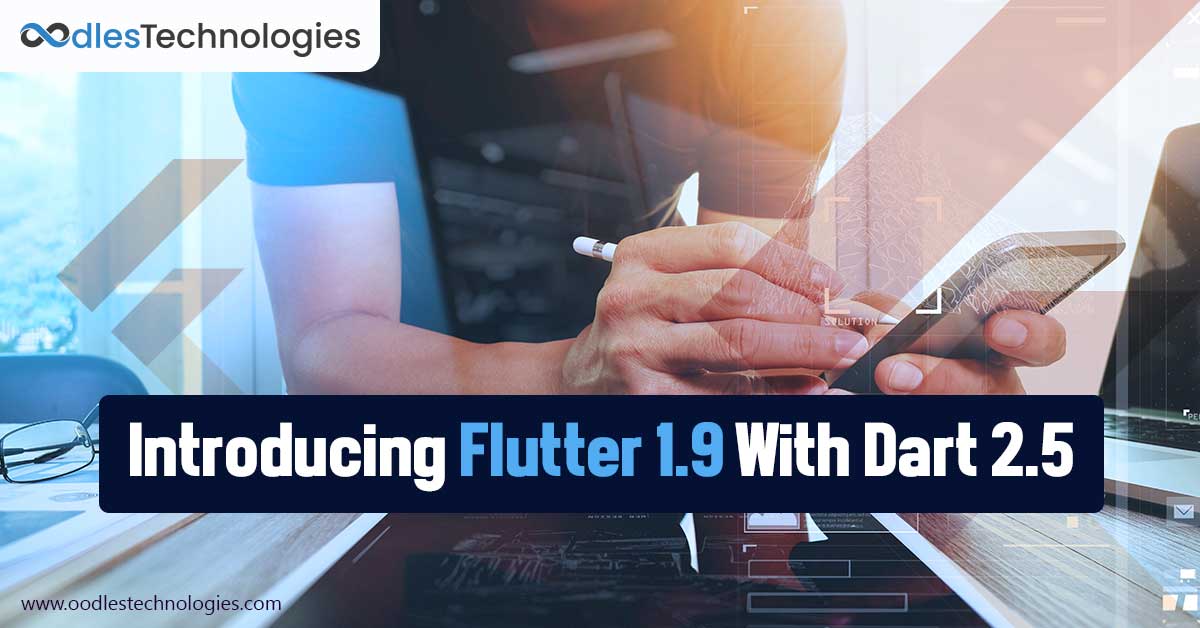 A majority of developers and technology companies are shifting to Flutter for cross-platform mobile app development. The Google-run mobile framework is becoming increasingly popular because of its unique features and extensive development and integration support. It’s been a few weeks since Google rolled out Flutter 1.9, the latest version that packs several new features and enhancements. With this update, Google brings Dart 2.5 support to accelerate the cross-platform mobile app development process. Dart 2.5 is a client-optimized programming language that is extensively used for building cross-platform applications.

Unlike its previous versions, Flutter 1.9 with Dart 2.5 support facilitates intelligent code completion with machine learning features. It enables developers to complete their code faster or recognize the API to use. At the same time, Google also renders support for macOS Catalina and iOS 13 versions. In this blog post, we will walk you through the latest features, notable changes, and enhancements in Flutter 1.9.

Dart is a class-defined programming language developed by Google for building feature-rich web, mobile, and desktop applications with backend support. It is an object-oriented language with a syntax comparable to the C-language. The newer version i.e Dart 2.5 offers several elements that were previously unavailable in Dart 2.0. Notably, there are two significant updates with Dart 2.5. The first major update is the foreign function interface to effortlessly call C code directly from the Dart FFI library. Another significant update is the machine learning-based code completion mechanism for accelerated development. Let’s move further and discuss these features in detail.

New Features and Enhancements In Flutter 1.9

Below are the new features and notable enhancements introduced by Google in Flutter 1.9 to accelerate and simplify the development process.

Writing extensive chunks of code can be a tedious task. At the same time, it is time-consuming to manually write each set of code as APIs start to grow. In Flutter 1.9, Google has introduced a guided interface with machine learning capabilities that accelerates the code completion cycle. The intelligent code completion feature in Flutter 1.9 incorporates the TensorFlow Lite engine to facilitate code completion through ML-based suggestions. It examines the Dart code to accurately predict the next characters as the developer continues to code. The feature is accessible across all Dart supported editors such as Visual Studio, Android Studio, and IntelliJ.

In the latest version, Google introduced the dart:ffi library, the foreign function interface that enables developers to call C code right from Dart. In simple terms, all applications developed using Flutter will be compatible with the system APIs and C code libraries. By rendering support for C code through Dart, Google has paved the way for budding developers to try their hands on Flutter intuitively.

Another significant enhancement comes in the form of extended support for web applications. In Flutter 1.9, Google has fused its web repository with the main Flutter repository. As a result, it now enables developers to build applications for multiple platforms including mobile, desktop, and web using the same codebase.

Flutter 1.9 introduces new Material design widgets to deliver interactive user experiences across devices and screens. Material is an open-source design platform that can be used to create engaging user interfaces for cross-platform applications. In addition, there are several new widgets such as the ToggleButtons widget that combines the previously available text and icon widgets. Besides, the new ColorFiltered widget enables developers to recolor a tree of child widgets with ease. It significantly addresses the user accessibility issues that mainly arise due to color blindness disabilities.

Support For iOS 13 and macOS Catalina

Good news comes for the Apple users and developers as Flutter 1.9 is ready for the latest versions of iOS and macOS. The support for iOS 13 and macOS Catalina comes as Google attempts to complement the Xcode 11 build system through Flutter. At the same time, Flutter 1.9 is also compatible with the draggable toolbar in iOS 13 with features such as long-press, drag-from-right, and vibration feedback. However, Google is yet to render support for the dark mode in iOS 13 and we may expect that in the future releases.

These were the most significant changes and enhancements in Flutter 1.9 that comes with the latest Dart 2.5 support. Apart from these, the new release adds a multi-lingual interface that supports up to 24 local and native languages spoken worldwide. Understandably, these are some extremely useful features for Flutter developers that may significantly improve Flutter application development services.