Developing mobile applications can produce remarkable results in the present ecosystem if they are compatible with different platforms. 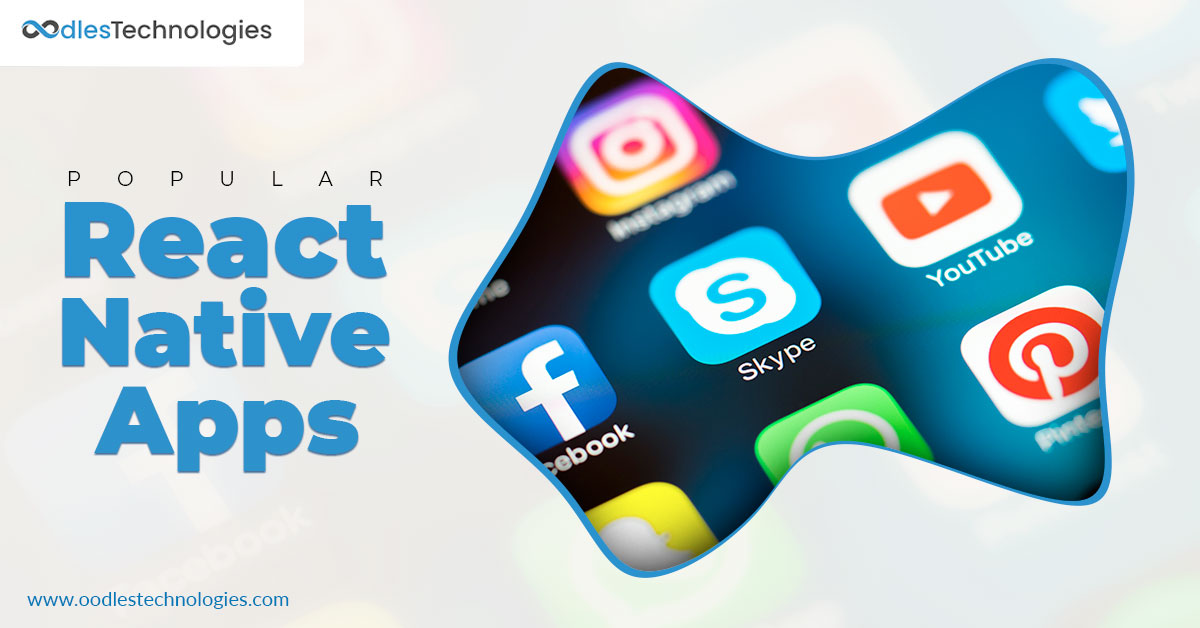 However, the trick is not using different sets of code to achieve cross-platform compatibility. React Native is causing the paradigm shift as it lets developers use most of the code and develop applications across platforms. As a mobile app development company, we are well-versed with this framework and are in constant search of innovative solutions.

In this blog, we will walk you through some of the popular apps that work on the React Native framework.

The world’s most popular social media platform turned to React Native to enable fast iterations and have a single team to build the app for Android and iOS, just like the web. What started as a Facebook Hackathon project soon become the solution company needed to bring all benefits of web development to mobile.

Facebook developers first took charge of the Events Dashboard feature in the Facebook for iOS app and converted it to React Native. After that, they tested the app performance. The result was in favor, as the React Native app has almost half the initial start time. It is one of the most significant parts of a user’s impression of the app. It can decide if the user will stay on the app or leave it. Using React Native, Facebook managed to improve scrolling performance, memory efficiency, UI responsiveness, and app startup time.

Also Read: A Technical Comparison of Flutter and React Native

It all started with the onset of 2017 when Skype decided to give a significant overhaul to its app. Microsoft announced that the new Skype app is going to run on the React Native framework. It would be complete revamp, right from the icons to the layout, and the addition of various new features as well.

The new app will do away with many issues that users were facing while using the app. Also, it was during this time that Microsoft introduced the “react” feature in its Skype app.

Screenshot Of The “React” Feature

The feature was long-awaited in the Skype app, as it enabled users to react to other’s messages in group chats. One more striking feature was that the new Skype app looked consistent on every platform, be it iOS, Android, or Windows.

The push notifications view feature was the first attempt by Instagram to integrate React Native into their existing native app.

Originally the Push Notifications view had the implementation like the WebView. As it was the simplest view, it didn’t require developing much navigation infrastructure as UI was quite simple. Although the developer team at Instagram faced a few hiccups at the beginning, ultimately, they found their speed. 85-99% of the code got shared between the Android and iOS apps, resulting in faster delivery of applications than the native solution. Here we have enlisted the percentage of code shared for some products on the app to give you an idea about how Instagram managed to increase developer velocity using React Native.

Also Read: Exploring the Differences Between ReactJS and React Native

Considered to be the first React Native app for Android, Facebook Ads led the way for the Facebook app. Given the complexity of data handling in Facebook Ads, React Native proved to be the ideal solution to increase the speed of development. Ad formats, time zones, currency conventions, currencies, date formats, among others, were a few being already written in JavaScript.

The React Native framework was a suitable solution for handling these complexities with ease. It eased the UI implementation on top of the data. Facebook managed to ship the first fully developed React Native app to both platforms. The app retained its native look and feel. Also, it was developed by the same group of JavaScript developers.

Also Read: What To Expect From React Native 0.62 With Flipper

The leading electric car manufacturer also turned to Facebook’s trending framework to build its application for electric cars and Powerball battery owners. Using the app, users can locate a vehicle, diagnose it, and even control it, although just partially.

The app is receiving a lot of positive feedback from the users overall. Thus, underlining the advantage of using the React Native framework for developing the application.

With these five apps leading the way, there are a few more that have joined the React Native community over the past few years. Airbnb, Walmart, Shine, Uber Eats are some of the notable mentions in this area. The future only looks brighter for this app development framework as developers are building custom applications written in React Native.

With over a decade of experience in development, we have raised a team of developers that are adept at using React Native to develop cross-platform mobile applications. Our React Native Mobile App Development Services can easily cater to your diverse needs and help you build an app that maximizes user engagement and interactivity.

Got time? Do check our portfolio here.