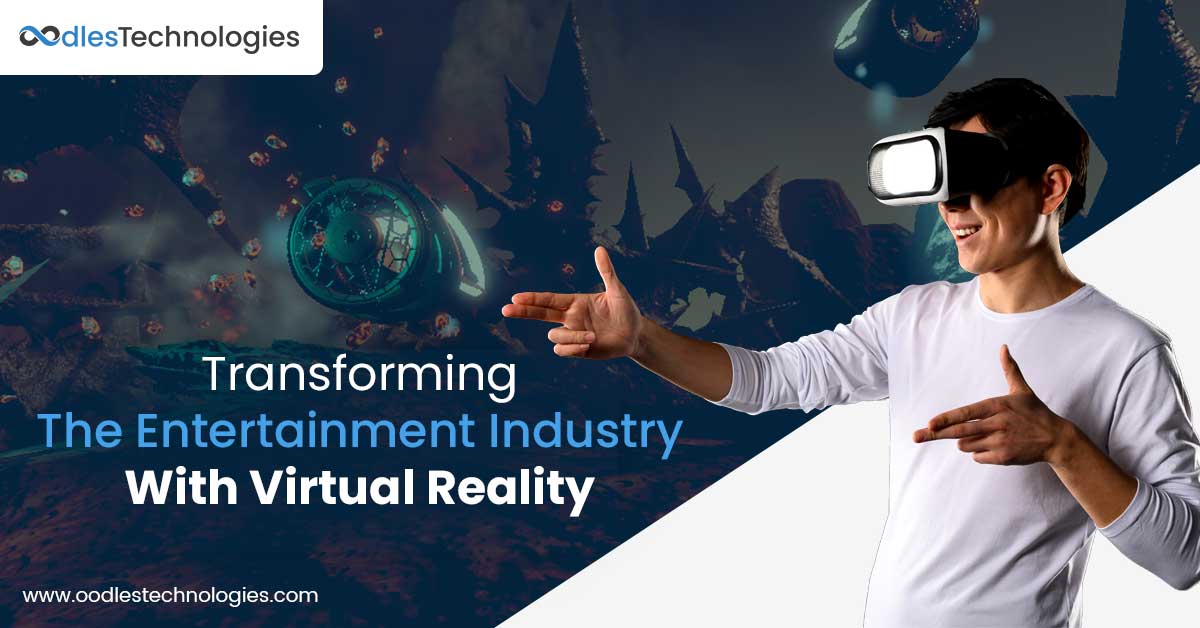 That being said, VR applications are effective at providing more personalized user experiences and are more immersive than their AR counterparts. As a result, VR has become a popular medium of entertainment that promises to engage your audience in the best possible manner.

Let’s explore some popular applications of VR in the entertainment industry and how it drives maximum user engagement and interactivity.

VR Applications In Gaming and Entertainment

Entertainment brands are always on the lookout for new and innovative ways to engage their audience. The advent of next-gen technologies like AR/VR has provided them an effective way to maximize user engagement and boost their revenue. Below are the most popular applications and use cases of virtual reality in the entertainment industry.

The immersive AR/VR technologies are transforming the cinematic experiences across the globe. Several prominent global film festivals like Sundance and Tribeca have introduced VR technology to feature short films, paving way for the interactive movie viewing. VR elements enable viewers to watch through the eyes of the movie characters, making them experience every scene in an immersive environment. Experts predict that it is going to be a leap forward from the modern-day IMAX technology that is improving the movie experiences of millions of people worldwide. Although it is far from going mainstream just yet, several production companies plan to launch IMAX VR centers across the globe.

The advent of virtual reality has taken gaming to the next level by providing an immersive environment with real-life simulations. VR techniques enable users to experience the thrill and excitement of a video game in a real-world environment. For example, VR makes a gaming experience so immersive and realistic, that gamers feel like they are transported to a whole new world.

VR-based games eliminate the traditional way of sitting in front of a television screen for hours. With virtual reality, gamers can actually indulge in a game almost as if they are a part of it. Furthermore, VR-based gaming applications allow gamers to interact with technology in a way that energizes them both physically and mentally.

The transformative aspects of virtual reality have made their way well beyond the closed spaces, bringing more fun to sports and outdoor activities. Users can enter a whole new world where everything looks magical, exciting, and as real as it could get. Virtual reality offers a number of opportunities for sports lovers to experience the heat of the game in the most exciting way. An increasing number of sports events are being shot with 360-degree cameras. These cameras enable authorities to create immersive real-time video footage of sports matches. Watching these videos with a VR headset gives you the impression as if you are running along with the players on the ground.

The technology is also increasingly popular in virtualization of adventure sports like paragliding, skydiving, and scuba diving. Several leisure brands have set up VR centers where adventure lovers can virtually experience the thrill of blood-pumping adventure activities.

You may also be interested in Factors Deciding the Cost of An Augmented Reality App.

Other Applications of VR

There is no doubt that virtual reality (VR) holds immense potential to transform the entertainment industry with its innovative aspects. Besides, the immersive technology has several other transformative applications in other fields. For example, VR-based techniques are effective at training a hotel staff with sheer accuracy and efficiency. Similarly, the technology is increasingly used in surgical training. Performing a virtual surgery is always a better way to train aspiring neurosurgeons to handle real-life situations.

It boosts their confidence level and prepares them for the actual surgical procedure which might be discomfited in the first attempt.

We are an AR VR app development company that specializes in building interactive VR apps to meaningfully engage the target audience. Our development team is skilled at using the latest VR development frameworks like OpenVR and Unreal Engine to develop applications that deliver immersive user experiences. We have successfully developed several AR VR apps for e-commerce brands, entertainment companies, and LMS solutions providers from across the globe. If you have an innovative idea to develop a futuristic AR or VR application, drop us a line or contact us for more detail.