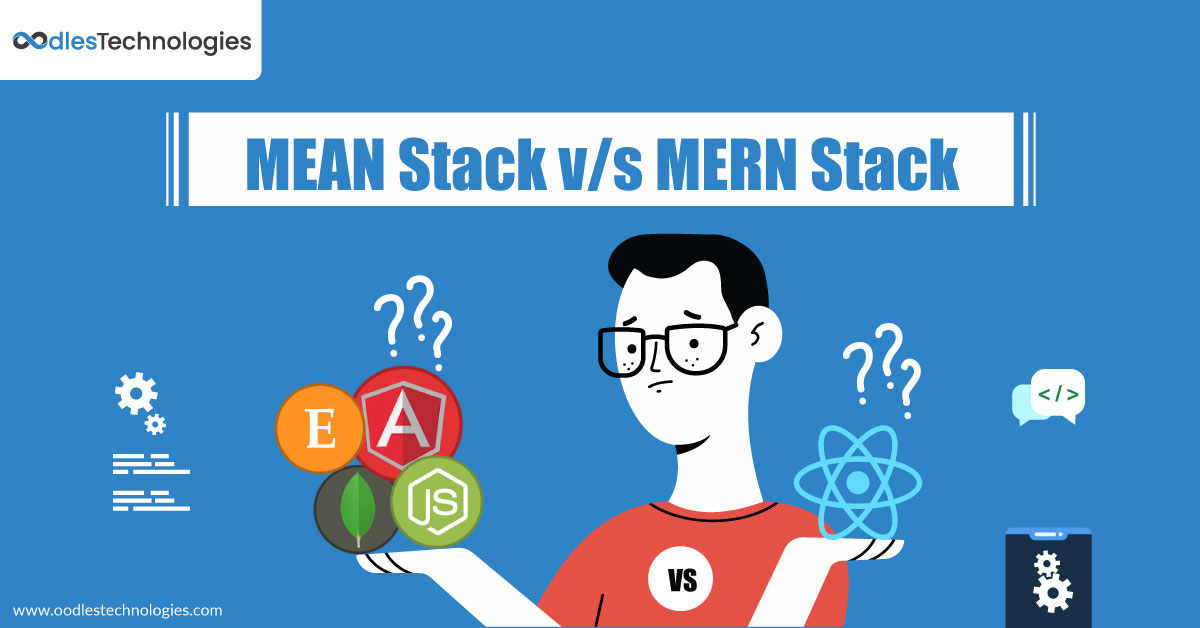 Oodles Technologies is a well-established MEAN Stack app development company. We develop apps that are feature-rich and easily scalable.

In this blog, we will discuss Stack frameworks MEAN and MERN. MEAN and MERN are stacks of technologies used for application development.

The components of MEAN include MongoDB, Express.js, AngularJS, and Node.js. The Technologies in MEAN stack are Javascript-Based suitable for developing complex websites and web apps. All four components of MEAN Stack speed up and simplify the development process. It is the fastest-growing open-source framework that enables developers to deploy web applications using popular tools and plugins.

The components of MERN include MongoDB, Express.js, React.js, and Node.js. The only difference between the two frameworks is AngularJS in MEAN is replaced with React.js in MERN. Some developers prefer to use React Native over Angular so for them MERN is perfect.

THE COMMON FEATURES: Both the stacks are flexible and easy to implement and built apps of the Model-view layout. The components of MEAN and MERN serve different purposes. Let’s explore each of the components in detail:

React.js is an exception in MERN. Discussion about React.js is discussed in the section where MERN stack benefits are listed.

Point of Differences Between MEAN and MERN Stack:

MEAN uses Angular because it is more stable than React. It is one of the most stable JavaScript-based MVC frameworks. It enables developers to effectively manage their files and abstraction in the coding.

MERN uses React.Js  to enable developers to code faster. React’s performance is better than Angular because it does the coding exceptionally faster. In terms of the performance, MERN wins over the MEAN stack.

MEAN stack is preferred for enterprise-level applications. In terms of the architecture MEAN Stack wins the game. MEAN uses Angular that renders with an organized framework to support an MVW and MVC architecture. In both the architectures the UI code and the database are isolated from an intermediate layer.   LinkedIn chose MEAN over MERN because React can make the UI rendering simple but in the end, it is just a library and it can be difficult to rely on MERN for maintenance of the architecture.

MEAN is there for a long time whereas MERN is comparatively new.  Famous Companies using Angular instead of React in their app development include YouTube, HBO, Nike, NASA. And companies using React over Angular: PayPal, Dropbox, Uber, Instagram, Netflix, Flipkart.

Are you still confused with the selection of the right app development framework? In our opinion, Both MEAN and MERN are reliable technologies that enable developers to create light-weight JavaScript applications easily. We design apps using MEAN Stack and MERN stack, based on our client’s preferences.  Connect with our Software app developers today!

Time-tracker software can furnish remarkable benefits for both employees and organizations, leading to better work, increased productivity, and higher profitability.

Web applications are by nature asynchronous and have to communicate to the server. Each request-response pair takes time, so we use visual elements called loaders.