Detailed Insights Into The Fusion Of Metaverse, Supercomputers, and AI

Understanding The Potential Of Metaverse, Supercomputers, and AI

As the metaverse innovations have started to uncover immense possibilities in diverse industry sectors, the buzz around the concept has proliferated manifolds. Metaverse, as we know it, is a borderless digital environment in the extended reality realm. In other words, it is basically an immersive virtual world approaching the ‘second life’ that is constructed as an alternative to physical reality.

However, while it is still in its nascent stage, the entry of supercomputers and artificial intelligence solutions has further sparked mega interests in the metaverse implementation services. It is also reported that some of the top tech firms in the world are rapidly building AI-powered supercomputers, thereby further fuelling the anticipations.

But what does the development and enhancement of supercomputers mean for virtual reality, and in particular, the metaverse? What value can it add to the metaverse innovations and how can we handle and manage it responsibly? Let’s find out in this blog! 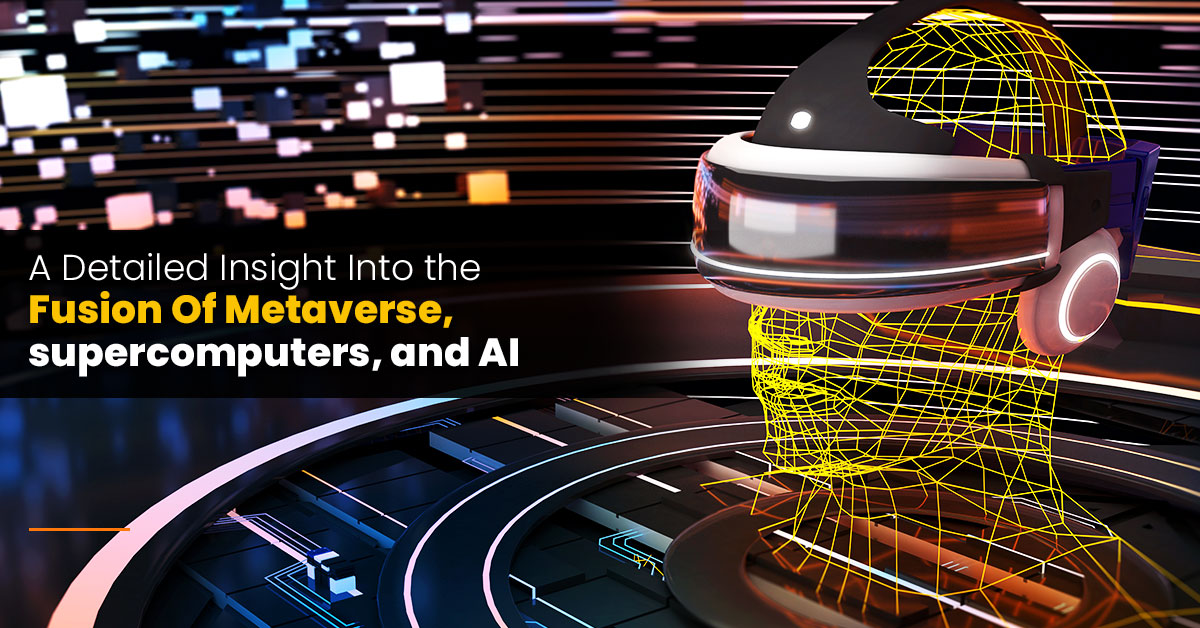 In a nutshell, a supercomputer is basically a high-performance computer. There are a plethora of ways that this performance, which is by far superlative to that of any desktop PC or consumer laptop in the market, could be potentially put to use. In order to perform the most complex computations possible, these computers comprise many computers working in parallel arrangements.

Whenever supercomputers are mentioned, there are chances that you will likely come across the term FLOPS or “floating-point operations per second” that is used to describe the speed of the supercomputers.

In essence, floating numbers are essentially are those with decimal points, including the ones that are very long. When carrying out complex operations or when processing large quantities of data on a computer, these decimal numbers are the key and this is exactly where FLOPS comes into the measurement. When managing these complicated calculations, it basically signals how a computer will likely perform.

According to research, the supercomputer market is likely to grow at a compound annual growth rate of 9.5% by 2026. Search adoption of cloud technologies and Cloud Computing services will fuel the rate of growth, as will the requisite for systems that can seamlessly ingest larger datasets to train as well as operate AI.

In late January, Meta announced on social media channels that it is working on building an AI-powered supercomputer. If Meta’s anticipations are correct, It will be one of the world's fastest supercomputers.

And what is its purpose? Running the most advanced and next-generation AI algorithms on it.

While the first phase of its development is already complete, the second phase is likely to be finished by the end of 2022. At that point, Meta’s supercomputer will have a total of 16,000 GPUs. The company has promised that it will be capable of training AI systems with more than a trillion parameters on data sets that can be as large as exabytes or simply, one thousand petabytes.

While these figures are profoundly impressive, what does it mean for metaverse and AI altogether?

Also Read: The Revolutionizing Effects of NLP in the Healthcare Industry

Embracing The Future With Metaverse and Supercomputers

Meta has promised a slew of revolutionary applications and uses of its supercomputer, ranging from a seamless and real-time translation of colossal quantities of videos or texts to ultrafast and glitch-free gaming experiences – just imagine an international conference where participants from different countries can communicate in real-time. It could also be potentially used for scanning huge volumes of videos or images for harmful content or recognizing any face among a huge crowd of people.

The groundbreaking and robust artificial intelligence models, the metaverse, and the future metaverse development technologies will all heavily depend on these computers. Meta’s supercomputers along with other supercomputers in general will have serious and critical ethical implications because of their gargantuan processing powers.

Emerging technologies have always demanded societal conversations regarding how they should and should not be used– and supercomputers are no exception in this regard.

While artificial intelligence services have been tremendously well at solving complex and large-scale problems in the world, the age of AI also brings along key aspects and questions about human privacy as well as the privacy of our thoughts.

In order to address these concerns, it is crucial that AI interactions are seriously examined. When analyzing the ethical structures of AI systems, we must ensure that their usage is explainable, transparent, accountable, and bias-free.

We must be capable of explaining why a certain process or calculation was triggered in the first place and what exactly happened when it was run by AI algorithms. It should be ensured that there’s no initial human bias against any idea or group and have utmost clarity about who should be held accountable for calculation results.

Nevertheless, these AI-powered supercomputers will incessantly become all the way more pressing as they continue to wield more influence and power in our lives- both in the physical world and the metaverse.

The exponential rise in the supercomputing era will further push the age of parallel computing as well as their use cases at the speed of thought. In the metaverse environment, we see a future where an amalgamation of intelligent software and supercomputers will effortlessly run on a hybrid cloud. Furthermore, it would be feeding partial computational workflows to a quantum computer, a type of computing that can possibly fuel the capacity of the fastest supercomputers.

It is notable to say that the continuous innovations and developments in the metaverse landscape will fuel the next-generation experiences to take concrete shape. At Oodles Technologies, we are already working on prominent virtual and augmented reality applications backed by metaverse implementation solutions for diverse industry sectors and we believe that it is the future of our world, or indeed- our ‘second-life’. If you are looking for metaverse development services for your business, feel free to request a demo or discuss your requirements with our experts.