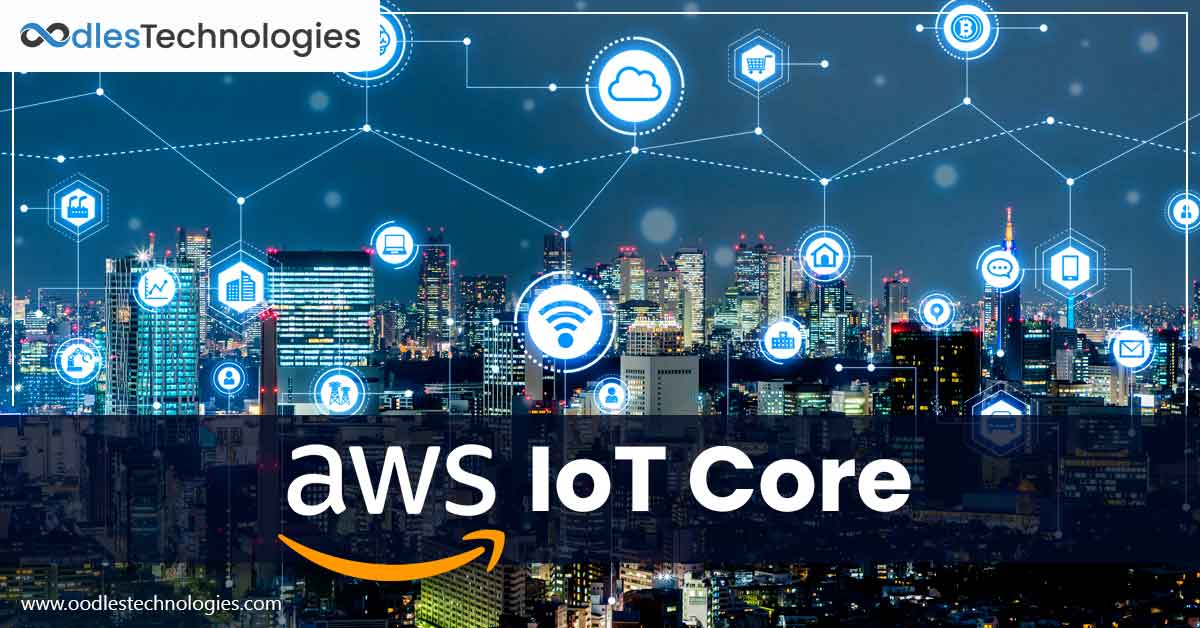 Connecting your smart devices to the cloud can be tricky in the absence of a prominent cloud service provider. Besides, if you have too many devices connected to the internet, managing them all can be a daunting task. AWS IoT Core is a fully managed cloud service that enables enterprises to connect their devices to the AWS cloud for increased security, transparency, and interoperability. It provides a centralized platform that facilitates secure data storage, retrieval, and accessibility across a wide range of devices. Besides, it enables enterprise applications to interact with the supported IoT devices even when they are offline.

AWS IoT Core is equipped with advanced capabilities to handle billions of IoT devices of all types. In addition, it can process trillions of messages and conversations and securely route them to AWS endpoints toward other devices. Another advantage of using AWS IoT Core is that you get built-in support for a wide range of Amazon Web Services such as AWS Lambda, Amazon QuickSight, DynamoDB, CloudWatch, Amazon Kinesis, AWS Media Services, and more. You may also use this platform to build feature-rich IoT applications and centrally manage them through a mobile app.

AWS IoT Core offers several unique features that enable enterprises to effortlessly connect an increasing number of IoT devices to the cloud. Below are the key features of AWS IoT Core.

Using AWS IoT Device SDKs, developers can easily connect any number of devices or an application to AWS IoT Core. It incorporates web protocols such as HTTP, MQTT, or WebSockets to connect devices to the cloud, authenticate and process messages over the AWS cloud. It supports popular programming languages such as C/C++ and JavaScript. AWS IoT SDKs come with built-in client libraries and development guide for manufacturers. Developers can use an open-source AWS SDK or cerate their own SDK to support their IoT devices.

The Rules Engine enables developers to build scalable IoT applications that exchange and process data generated by the connected devices. The main benefit of developing applications through Rules Engine is that you don’t have to manage the complex software infrastructure. It automatically processes messages and conversations under AWS IoT Core and delivers them to another device or cloud service. Furthermore, it quickly routes messages to several AWS endpoints like AWS Lambda, AWS IoT Events, AWS IoT Analytics, Amazon Kinesis, Amazon ElasticSearch, Amazon DynamoDB, and CloudWatch.

Device shadow is basically the virtual representation of each device connected to AWS IoT Core. By creating a device shadow, you can virtually analyze a device’s current state with respect to applications and other devices interacting with it. The device shadow lets you retrieve the last reported state of each device connected to the AWS cloud. In addition, you can set a desired future state of a device through the AWS IoT Core APIs or via rules engine.

With AWS IoT Core, you can avail the Alexa Voice Service (AVS) to effortlessly manage your devices having Alexa Built-in capabilities. You can scale an increasing number of supported devices with AVS integration and manage them through voice commands. The AVS integration also facilitates seamless media handling for the connected devices in a virtual cloud environment.

AWS IoT Core enables individuals and enterprises to connect their devices to the cloud as well as other devices connected to the internet. It renders extensive support for components like WebSockets, MQTT, and HTTP to enable seamless connectivity with minimal bandwidth disruptions. In addition, AWS IoT Core facilitates seamless communication between the connected devices as it processes trillions of messages and conversations in minutes.

We are a 360-degree AWS development company that provides complete AWS cloud services to strengthen and streamline enterprise processes. Our development team is skilled at using a variety of AWS tools and technologies like AWS Lambda, AWS CloudFront, Amazon Kinesis, Amazon EC2, AWS Media Services, and more. We have successfully completed several full-scale cloud computing projects using the AWS development suite. Our AWS development services maximize your business efficiency by putting you in control of your devices through a centrally managed cloud solution. We use agile methodologies to develop  AWS-based IoT applications that let you handle an increasing number of IoT devices with ease.

Were you also stuck when you were working on two different Node.js projects and both of them used different versions? If yes, you will never stuck again, just read the blog till end.

Microservices: 3 Reasons Why It Matters For IoT Architecture

Microservices have assisted in reinventing the complete process of software development services and for offering custom IoT app development solutions.