Python is an extensively used programming language that enables developers to build responsive web and mobile applications with cross-platform compatibility. A large community of developers prefer Python for web application development because of its open-source support libraries and ease of use. According to Stack Overflow, more than 122,864 websites were developed using Python as of 2018. 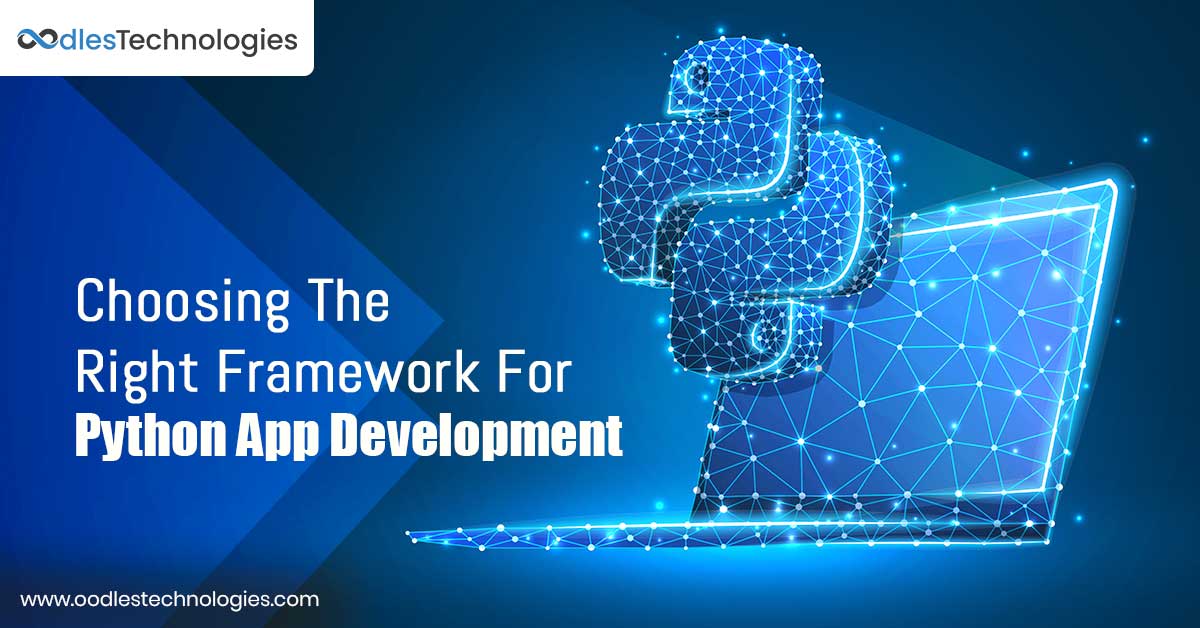 At Oodles, we have built several high-quality enterprise websites using Python that are successfully running across multiple countries. The main benefit of Python app development is that you get access to several third-party modules and intuitive data structures that accelerate the development process. In addition, it provides enhanced process control capabilities that reduce complexities and speeds up the process.

Below are the two most extensively used frameworks for Python web app development processes.

Django is an open-source Python framework that simplifies and accelerates web application development with a high-level programming interface. It simplifies the creation of complex database-driven websites and provides several tools to speed up the process. Django follows a model-template-view (MTV) architectural pattern and mainly focuses on the reusability and pluggability of various components. It incorporates low coupling and reduces coding requirements, resulting in rapid development throughout the production cycle. The framework also provides an administrative interface that can be dynamically created and configured via admin models.

Flask is a Python-based micro web framework that enables developers to dynamic web pages and web applications. Popularly known as a microframework, it has no database abstraction layer and doesn’t require third-party tools or libraries. Nevertheless, with Flask, the developers get access to several extensions to add various features and functionalities in a web application. These extensions are regularly updated to meet the dynamically changing development requirements.

Flask vs Django: A Quick Comparison

Below are the main points of comparison between Flask and Django:

As already mentioned above, Django is a full-stack web framework for Python web application development. It mitigates the development complexities by providing a built-in template engine, bootstrapping tools, and an ORM system to accelerate web development.

On the contrary, Flask is a microframework that enables developers to build simple and lightweight web applications with limited features. Unlike Django, it doesn’t include the built-in tools or libraries but supports extensions for adding custom features in web applications.

Django provides an intuitive, functional, and ready-to-use interface for handling common project administration processes. The admin interface is also customizable to fulfill the dynamically changing project requirements. Flask on the other hand, lacks this kind of interface and is more useful in handling simple administration tasks with minimal complexities.

Django provides a built-in bootstrapping tool called django-admin which enables developers organize their tasks and build applications without any external input. Flask, on the other hand, doesn’t have a built-in tool for bootstrapping.

Unlike Flask, Django has a built-in template engine which accelerates the development of custom user interfaces using its proprietary template language. On the other hand, Flask supports a template engine based on Jinja for programming in Python.

You may also be interested in reading Understanding Python 3.8 Version.

Both Django and Flask are being extensively used to build high-quality websites and web applications. However, when it comes to creating complex enterprise applications with advanced features and dynamic interfaces, Django is the best tool to use. Flask is more suited for building simple and lightweight web applications with limited features and use cases. Usage statistics reveal that some of the best business websites are built using Django. The latter is clearly more popular than Flask in Python web app development. However, Flask is more effective at building simple websites more efficiently and within the project timeline at reduced costs.