If you're in the market for a smart TV, there are handy chances that you'll come across WebOS and Android. The two smart TV OS have a lot in common but are also very distinct from each other at the same time.

Android TV, a product of Google, can be found on many devices, including streaming sticks, set-top boxes, smart TVs, and more.

On the other hand, WebOS is a Linux-based operating system (OS) produced by LG. 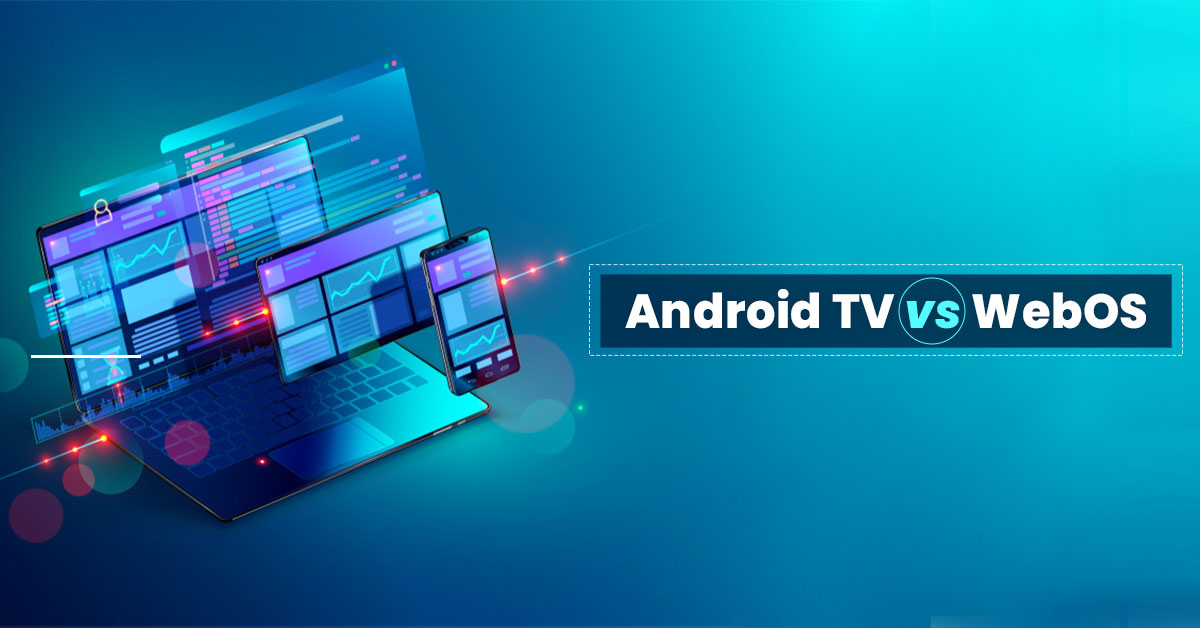 However, LG is gradually opening up the software and has partnered with other manufacturers to add WebOS on their TVs.

Depending on which one you choose, WebOS or Android TV, you'll end up with a recognizably different user interface. The two OSs come with their own set of pre-installed apps and offer features that will eventually guide your overall smart TV experience.

For anyone in the market for smart television, you're very likely to run into two popular operating systems, Google's Android TV and LG's WebOS.

Also Read:- The Future Implications of OTT And Connected TV

What are the Differences: WebOS vs. Android TV?

Of the two OS, Android TV is open in a broader variety of products.

Besides smart TVs, Android TV is available on set-top boxes, streaming sticks, and more. On the other hand, Linux-based WebOS is only found on LG smart TVs, to date. However, LG is beginning to partner with other manufacturers to install the OS on different models like Konka, RCA, and Ayonz.

The main key features to differentiate among both of them is:-

Like various popular smartphones, apps are slowly taking over our living rooms as well. Both WebOS and Android TV feature app stores. Android TV is tied to the more extensive Google Play Store library, so its selection is vast. And yet, both platforms offer some of the most prevalent streaming apps and services. In addition, most come pre-installed on both platforms.

Therefore, in the case of smart TV apps, less may mean more unless you like complex programming that, as of now, might only be available on Android TV.

In the Mist of Change

We're in a stage of change for both the Operating Systems. Instead of Android TV, devices will soon be offering the Google TV OS in the coming year. The rollout will undoubtedly depend on the type of device and won't affect the current Android TV installation.

WebOS is being reimagined with 2021 LG TVs. The new interface version 6.0 provides full-screen devices with rows of banners, apps, content recommendations, and more.

However, the underlying features of WebOS and Android TV aren't changing anytime soon.

Android TV and WebOS have both become easier to use over the years. However, you will still notice some key differences among them.

For now, Android TV features rows of content that take over the entire home screen.

Then again, WebOS is considerably more minimalist in its presentation. You'll discover an exceptionally adjustable dispatch bar on the lower third that springs up at whatever point you need it. From here, you can get to applications, settings, and other TV features.

It is inaccurate to call one OS better than the other, in spite of the fact that there's no denying which one looks more recognizable to more individuals. Android TV looks strikingly like the interface of Android-based cell phones. This recommends WebOS could include a more extreme expectation to absorb information for specific clients.

The main contrasts between Android TV and WebOS include the controllers that boat with every framework. Google's remote is significantly more essential than LG's Magic Remote. The last accompanies point-and-click functionality that feels practically like utilizing a mouse on a Mac or PC. This plan makes exploring WebOS a lot simpler. Be that as it may, once more, there's all the more an expectation to absorb information here before all else.

In the event that you'd prefer not to utilize an actual remote, the two stages offer cell phone application combinations and voice controls.

Is There a Winner: WebOS vs. Android TV?

Such a large amount of what one does on smart TVs center around its operating system and working frame. But, scarcely any future buyers make a choice based on it. Instead, hardware and price are the essential elements at the current choice time.

While looking for a smart TV, look extensively for the best-assessed models of the year that match your spending plan, then, at that point, settle on your decision.

You'll adjust to Android TV or WebOS, paying little mind to your determination. Be that as it may, MAZ upholds both Android TV and WebOS. Reach out to Oodles Technologies to find out additional information regarding the same OS.

Samsung Tizen and many more.

A trusted OTT CMS can lift the burden off your shoulders by simplifying content management, distribution, and online video streaming on a real-time basis.

What is the difference between SFU and MCU

WebRTC media servers .What does that mean? SFU or an MCU

Top 4 CRM Features To Implement In Your OTT Business

CRM software for OTT helps in managing and automating the customer lifecycle for sales & marketing, performance management, and subscription management.